A wizard when young has a staff that is small.
It's puny and weak, ineffective withal.
It grows with his power until it stands tall
As his fame and his glory expand.

The staff of a wizard can hold many spells
For finding lost objects or dowsing new wells
For banishing demons to bottomless hells
Or bringing them back on demand.

When a wizard is old, and is starting to fade
He looks on his staff that with cunning he made
The crown of his life and the tool of his trade
And together they make their last stand.

Based on hints from Terry Pratchett in various books. Usually performed by Nanny Ogg.
These three verses appear on the CD From The Discworld with music by Dave Greenslade.
Virgin CDV 2738, 1994
©Heather Wood 1994 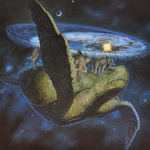