Their ​Eyes Were Watching God 81% 13 csillagozás 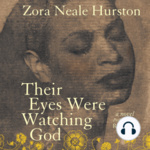 This novel about a proud, independent black woman was first published in 1937 and generally dismissed by reviewers. It was out of print for nearly 30 years when the University of Illinois Press reissued it in 1978, at which time it was instantly embraced by the literary establishment as one of the greatest works in the canon of African-American fiction.

Mesmerizing in its immediacy and haunting in its subtlety, Their Eyes Were Watching God tells the story of Janie Crawford—fair-skinned, long-haired, dreamy woman—who comes of age expecting better treatment than what she gets from her three husbands and community. Then she meets Tea Cake, a younger man who captivates Janie's heart and spirit, and offers her the chance to relish life without being one man's mule or another man's adornment.

Ships at a distance have every man's wish on board.

Rumor, that wingless bird, had shadowed over the town.

Janie's first dream was dead, so she became a woman.

„ […] Dey gointuh make 'miration 'cause mah love didn't work lak tgey love, if dey ever had any. Then you must tell 'em dat Love ain't somethin' lak uh grindstone dat's de same thing everywhere and do de same thing to everything it touch. Love is lak de sea. It's uh movin' thing, but still and all, it takes its shape from the shore it meets, and it's different with every shore.”