It's an offer you can't refuse.

Who would not wish to be the man in charge of Ankh-Morpork's Royal Mint and the bank next door?

It's a job for life. But, as former conman Moist von Lipwig is learning, life is not necessarily for long.

The Chief Cashier is almost certainly a vampire. There's something nameless in the cellar (and the cellar itself is pretty nameless), and it turns out that the Royal Mint runs at a loss. A three-hundred-year-old wizard is after his girlfriend, he's about to be exposed as a fraud, but the Assassins' Guild might get to him first.. In fact, a lot of people want him dead.

Oh. And every day he has to take the Chairman for walkies.

What he should be doing is… Making Money!

You get a wonderful view from the point of no return.

I love democracy. I could listen to it all day.

What the iron maiden was to stupid tyrants, the committee was to Lord Vetinari; it was only slightly more expensive, far less messy, considerably more efficient, and, best of all, you had to force people to climb inside the iron maiden.

I'm a criminal. Trust me.

It was a dream, but Moist was good at selling dreams. And if you could sell the dream to enough people, no one dared wake up.

His Lordship Desired Me To Inform You That There Is Still No Rush.

It contained herbs and all natural ingredients. But belladonna was a herb, and arsenic was natural.

But he's not a murderer or anything.
I'm an Igor, thur. We don't athk quethtionth.
Really? Why not?
I don't know, thur. I didn't athk.

The whole silly business had been a matter of etiquette, really. Miss Maccalariat, who ruled the Post Office counters with a rod of steel and lungs of brass, had objected to a male golem cleaning the ladies' privies. How Miss Maccalariat had arrived at the conclusion that they were male by nature rather than custom was a fascinating mystery, but there was no profit in arguing with such as her.
And thus, with the addition of one extremely large cotton print dress, a golem became female enough for Miss Maccalariat. The odd thing was that Gladys was female now, somehow. It wasn't just the dress. She tended to spend time around the counter girls, who seemed to accept her into the sisterhood despite the fact that she weighed half a ton. They even passed on their fashion magazines to her, although it was hard to imagine what winter skincare tips would mean to someone a thousand years old with eyes that glowed like holes into a furnace. 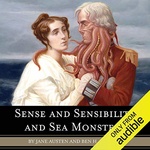