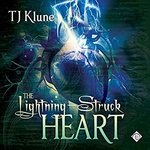 Once upon a time, in an alleyway in the slums of the City Of Lockes, a young and somewhat lonely boy named Sam Haversford turns a group of teenage douchebags into stone completely by accident.

Of course, this catches the attention of a higher power, and Sam’s pulled from the only world he knows to become an apprentice to the King's Wizard, Morgan of Shadows.

When Sam’s fourteen, he enters the Dark Woods and returns with Gary, the hornless gay unicorn, and a half-giant named Tiggy, earning the moniker Sam of Wilds.

At fifteen, Sam learns what love truly is when a new knight arrives at the castle—Knight Ryan Foxheart, the dreamiest dream to have ever been dreamed.

Naturally, it all goes to hell when Ryan dates the reprehensible Prince Justin, Sam can't control his magic, a sexually aggressive dragon kidnaps the prince, and the King sends them on an epic quest to save Ryan's boyfriend, all while Sam falls more in love with someone he can never have.

Or so he thinks.

“I like him,” Mama told me, waving dismissively at Ryan.
“What? Why? You don’t like anyone!”
“Uh, hi,” Ryan said. “Standing right here.”
“I like you,” she said to me.
“Well, yes,” I said. “But I like to think I am a special case.”
“You are a special case,” she said sweetly.
“You just insulted me, didn’t you?”
“I would never do such a thing,” she said, folding her hands in front of her.
“But Ryan?” I said. “You hate the knights. And the government. And the King! You called them capitalist scum who harbor resentments against the proletariats even though they rely on them for industry.”
“Still standing right here,” Ryan said. “And I don’t know what proletariats are. But I feel like someone is insulting me. Somehow.”
Mama rolled her eyes. “I’m allowed to change my mind about people, Sam.”
“You just think he’s hot,” I accused her, as if this was not a common consensus by everyone currently in the room.
“Yeah,” Mama said. “He is. Like fire. I want him to burn me. All over my face.”
“Feeling a little objectified now,” Ryan said.

“He’s not having sex with Moishe,” Ryan growled.
Mama’s eyes gleamed. “And just why is that, Knight Commander?”
“Because.”
“Great answer,” Mama said. “I believed it. Right down to my toes.”
“You don’t own me,” I reminded him. “Do we need to go through this again?”
“Again?” Mama asked.
“Fairies,” I said, trying to remember what it was I needed to ask Mama. She tended to suck me into her circular conversations and I always left without remembering why I came to begin with.
“Dimitri?”
I nodded. “A few days ago.” I started to tune them out so I could think. I needed something from Mama.
“Everything wants to have sex with him,” Ryan said.
“Really?” Mama asked. “Everything. Imagine that.”
“Dark wizards,” Ryan said. “Tiny men with wings. Fan clubs. Dragons. Guys with weird ears because apparently that’s sooooo cool and whatever, you know? We all have ears. Gods.”
“Huh,” Mama said. “And just how much do you want to fu—”

Regardless of how ruthless she could be, regardless of her own claims of being cold-hearted, she was still Mama to me. My fairy drag mother. The woman who had taught me to trust myself and my instincts. Morgan could teach me magic. My parents could teach me morals. Gary and Tiggy could teach me brotherhood. But Mama taught me that while life had sharp edges, it would only cut you if you allowed it to.

There's someone out there for you," he said. "Someone who will love your hair and your words and your eyes and the way you still scrunch up your nose when you're thinking hard on something. He will love you for all of the things that you are and all of the things you aren't. He'll love you beyond all reason and will be convinced that you hung the sun and moon. He will see the stars and wish for only you. Someone will love every single part of who you are, and my gods, I can't wait for the day to meet him to tell him thank you.

It's here. Ever since I first saw you, you've been with me. I couldn't have forced you away if I tried. I'm sorry I made an oath. I did it because I thought it was the right thing to do. And I'm sorry that I can't break it. But you have to believe me that it's always been you. I promise. I promise." His voice cracked and my hands shook. "I promise, because when I look upon these stars, there is nothing I wish for more than you.

“What are you doing?” I whispered.
“Nothing,” he said and then tried to shove me behind him.
“Are you trying to protect me?” I asked, starting to get slightly pissed. “Dude. Knock it off. You’re not my knight in shining armor. You’re a dick in dented tin.”

“Okay,” Kevin said. “Here is my compromise. I take all my stuff and I won’t burn your face off.”
“You can’t compromise with violence.”

„Sam.”
„Yeah.”
„Stay safe.” And the crystal went dark.
„Gods,” I muttered. „I can't even get the exit line. I don't get the guy, my clothes don't billow when I crest hills, I don't even get the last word. What the fuck.”

“You don’t eat people, though,” I said.
“You don’t?” Justin asked. He uncrossed his arms and turned back toward the dragon.
Kevin glared at me before turning back to Justin. “No,” he admitted. “Too boney. I try to stay healthy. I’m mostly a vegetarian. Every now and then, I’ll treat myself to a cow on my cheat day, but that’s about it.”
“You’re a vegetarian,” I said.
“Mostly,” he said.
“You’re mostly a vegetarian.”
“Yes.”
“You’re ruining dragons for me,” I said. “Everything about you is ruining dragons for me.”
“Oh?” Kevin said. “Is it because I’m your first?”
“Yes. My one and only and—”
He reached out with a claw and scraped it on the ground next to my feet. “How did it feel to have your dragon cherry popped?”

Nothing difficult was ever won while staying sane.