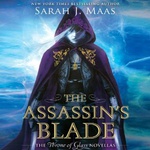 Read the stunning prequel to the epic saga Time Magazine called, “One of the best fantasy series of the past decade.”

Celaena Sardothien is Adarlan's most feared assassin. Though she works for the powerful Assassins' Guild, she yields to no one and trusts only her fellow killer-for-hire, Sam. When Celaena's scheming master, Arobynn Hamel, dispatches her on a mission that takes her from remote islands to hostile deserts, she finds herself questioning his orders. She will have… (tovább)

Read the stunning prequel to the epic saga Time Magazine called, “One of the best fantasy series of the past decade.”

Celaena Sardothien is Adarlan's most feared assassin. Though she works for the powerful Assassins' Guild, she yields to no one and trusts only her fellow killer-for-hire, Sam. When Celaena's scheming master, Arobynn Hamel, dispatches her on a mission that takes her from remote islands to hostile deserts, she finds herself questioning his orders. She will have to risk it all if she hopes to escape the Guild's clutches, and if she fails, she'll lose not just her freedom-but also her life.

The Assassin and the Empire ~ Nem. Fogok. Beszélni. Róla.
Soha.

When he could breathe again, Sam cleared his throat. “Come on, Sardothien,” he said, slinging an arm around her shoulders. “If you’re done liberating slaves and destroying pirate cities, then let’s go home.”

”My name is Celaena Sardothien,” she whispered, ”and I will not be afraid.”

A glimmer of movement caught her eye by the towering doors atop the stairs. Four young men wearing masks stood atop the steps, surveying the crowd. It took all of two heartbeats for her to see that the dark-haired youth was their ringleader, and that the fine clothes and the masks they wore marked them as nobility. Probably nobles looking to escape a stuffy function and savor the delights of Rifthold.
The masked strangers swaggered down the steps, one of them keeping close to the dark-haired youth. That one had a sword, she noticed, and from his tensed shoulders, she could tell he wasn’t entirely pleased to be here. But the lips of the ringleader parted in a grin as he stalked into the crowd. Gods above, even with the mask obscuring half of his features, he was handsome.
She danced as she watched him, and, as if he had somehow sensed her all this time, their eyes met from across the room. She gave him a smile, then deliberately turned back toward the singers, her dancing a little more careful, a little more inviting. She found Sam frowning at her. She gave him a shrug.
It took the masked stranger a few minutes—and a knowing smile from her to suggest that she, too, knew exactly where he was—but soon she felt a hand slide around her waist.
“Some party,” the stranger whispered in her ear. She twisted to see sapphire eyes gleaming at her. “Are you from Melisande?”
She swayed with the music. “Perhaps.”
His smile grew. She itched to pull off the mask. Any young nobles who were out at this hour were certainly not here for innocent purposes. Still—who was to say that she couldn’t have some fun, too? “What’s your name?” he asked above the roar of the music.
She leaned close. “My name is Wind,” she whispered. “And Rain. And Bone and Dust. My name is a snippet of a half-remembered song.”
He chuckled, a low, delightful sound. She was drunk, and silly, and so full of the glory of being young and alive and in the capital of the world that she could hardly contain herself.
“I have no name,” she purred. “I am whoever the keepers of my fate tell me to be.”
He grasped her by her wrist, running a thumb along the sensitive skin underneath. “Then let me call you Mine for a dance or two.”

280. oldal - The Assassin and the Underworld

Slowly, Celaena turned north, toward the source of the breeze, which smelled of a faraway land she hadn’t seen in eight years. Pine and snow—a city still in winter’s grasp. She breathed it in, staring across the leagues of lonely, black ocean, seeing, somehow, that distant city that had once, long ago, been her home. The wind ripped the strands of hair from her braid, lashing them across her face. Orynth. A city of light and music, watched over by an alabaster castle with an opal tower so bright it could be viewed for miles.

44. oldal (The Assassin and the Pirate Lord)

„Celaena?” Sam asked into the dark. „Sholuld I worry abaut going to sleep?”
She blinked, then laughed under her breath. At least Sam took her threats somewhat seriously. She wished she could say the same for Rolfe.
„No,” she said „Not tonight.”
„Some other night then.” he mumbled. Within minutes he was out.
Celaena reasted her head aganist the wooden wall, listening to the sound of his breathing as the long hours of the night stretched by.

She'd have to leave her furniture and most of her shoes behind for now, but there was no way in hell she was going to move to the southern continent without all of her books.

Yet there, deep in her gut, was a small but insistent tug. A tug on a strand of some invisible web. So Celaena decided to tug back, just to see how far and wide the reverberations would go.

“Sam,” she murmured into his chest.
“Hmm?”
She peeled away from him, stepping out of his arms. “If you ever tell anyone about me embracing you… I’ll gut you.”

You're just a spoiled, selfish bitch.

“We have all the time in the world.”