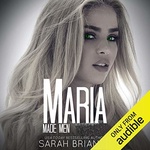 Maria is the mafia princess of Kansas City, destined to be the prize to the most loyal Caruso soldier.
Her killer looks hide the fact that she’s as ruthless as any male in the family.
But this princess is no trophy wife.
Fuck destiny.

Two men face death without fear, wanting to achieve the unattainable.
Kayne Evans, the man who carries a secret that makes him more than just an English teacher.
And Dominic Luciano, the rival mob boss who carries a Glock and a grudge.
As the sun rises, one victor will remain standing while the other will see his last dawn.
Who will live and who … will … die?

„I suppose it is true.”
„I don't know what you're ta--”
„Don't. You. Dare,” Dominic commanded her silence. „Don't you dare play the fucking stupid blonde with me.”

„Cassius is like your father, isn't he?”
„You mean, like Lucca…” His eyes bore harder into her emerald ones. „And you.”

There was a special place in hell for people who licked their utensils while feeding a group of people. That was called L-A-Z-Y, all because the cook didn’t want to dirty a new spoon.

Kayne might have smiled as she walked away, but the slight flex in his jaw revealed the man she had once thought had to be a saint … wasn't.
Shaking his head when she reached them, Jerry held open the door for them to finally leave. „Four years later, and you're still nothing but trouble, I see, Maria.”
„Whatever do you mean?” She played dumb to match the color of her hair like the world expected of her.
„Save it for the next schmuck. I'm only watching your ass for the next week 'cause there was no one else stupid enough to say yes.”
„Aw, thanks, Jerry.”

„This is bad.” What woman dreams about a man only to wake up and fuck another? Maria's newly sexually frustrated body didn't know it was practically every woman on earth.

There was only one thing for sure in this life.
Payback
Was
A
Mother
Fucking
Bitch.

„(…) I might have a little bit of a temper.” She decided to give the poor man a tiny bit of a warning before he thought she was all beauty and no brawn.
„A little?”