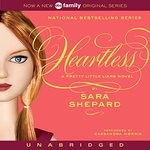 The newest installment in Sara Shepard’s bestselling Pretty Little Liars series is packed with juicy drama and delicious surprises that will keep readers guessing to the very end.
Hanna, Aria, Emily, and Spencer have been telling some outrageous tales; only, the proof always seems to go missing. The friends insist they’re telling the truth, but all of Rosewood thinks they’re just out for attention—and nobody likes a girl who cries wolf. So when the big bad killer comes after them, will anyone believe the girls. . . or will they be the next to disappear?

Even good girls have secrets.

There's time to keep hope alive and a time to let go.

Sometimes you just don’t know what’s going on inside of people.

But just remember, the world has a way of balancing out: When something is given back, something away.

"Do you have a blog?”
“No,” Hanna answered, trying not to scoff. Blogs were for people who didn’t have lives.

12. fejezet - Even a Nuthouse Needs an in Crowd

Poor little Emily –
You and I both know she’s alive. The question is: What would you do to find her?—A

6. fejezet - Down the rabbit hole

If someone had told her a few weeks ago that she’d be dating Mike Montgomery, she would have swallowed her Crest Whitestrip in surprise-she’d only pursued Mike because her soon-to-be stepsister, Kate, wanted him too. But somehow in the process, she’d actually started to like him. With his ice blue eyes, pink, kissable lips, and raunchy sense of humor, he was becoming more than just Aria Montgomery’s popularity-obsessed younger brother to her.

Ali was the girl at Rosewood Day who set trends, topped every guy’s Hottest Girl list, and decided who was popular and who was an undesirable Not It. She Jason, to the school’s strictest history teacher.

Bad things didn’t happen in places like Rosewood. And they certainly didn’t happen to girls like Ali. She’s fine, they thought. She’ll be back.