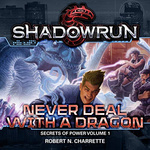 WHERE MAN MEETS MAGIC AND MACHINE

The year is 2050. The power of magic and the creatures it brings have returned to the earth, and many of the ancient races have re-emerged. Elves, Orks, Mages and lethal Dragons find a home in a world where technology and human flesh have melded into deadly urban predators. And the multinational mega-corporations hoard the only thing of real value – information.

For Sam Verner, living in the womb of the Renraku conglomerate was easy, until his sister disappeared and the facade of the corporate reality began to disintegrate. Now Sam wants out, but to „extract” himself he has to slide like a whisper through the deadly shadows the corporations cast, through a world where his first wrong move may be his last… the world of Shadowrun.