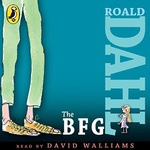 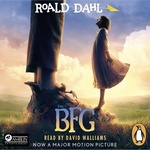 Every night, when the world is sleeping, big gruesome giants guzzle up whoppsy whiffling human beans. And there's only one giant who can stop them – the BFG. He's the kindest giant there is and, with his friend Sophie in his top pocket, he sets out to rid the world of the Bloodbottler,the Heshlumpeaterand all their rotsome friends forever…

"Music is very good for the digestion,' the Queen said. 'When I'm up in Scotland, they play the bagpipes outside the window while I'm eating. Do play something.'
'I has Her Majester's permission!' cried the BFG, and all at once he let fly with a whizzpopper that sounded as though a bomb had exploded in the room.
The Queen jumped.
'Whoopee!' shouted the BFG. 'That is better than bagglepipes, is it not, Majester?'
It took the Queen a few seconds to get over the shock. 'I prefer the bagpipes,' she said. But she couldn't stop herself smiling.
*
Ebben benne van az a nagyon sok minden, ami angol, humor is, észjárás is, a sztori is. Nagyon tetszett, hát még a vége!

Sophie couldn't sleep.
A brilliant moonbeam was slanting through a gap in the curtains. It was shining right on to her pillow.
The other children in the dormitory had been asleep for hours.
Sophie closed her eyes and lay quite still. She tried very hard to doze off.
It was no good. The moonbeam was like a silver blade slicing through the room on to her face.
The house was absolutely silent. No voices came up from downstairs. There were no footsteps on the floor above either.
The window behind the curtain was wide open, but nobody was walking on the pavement outside. No cars went by on the street. Not the tiniest sound could be heard anywhere. Sophie had never known such a silence.
Perhaps, she told herself, this was what they called the witching hour.
The witching hour, somebody had once whispered to her, was a special moment in the middle of the night when every child and every grown-up was in a deep deep sleep, and all the dark things came out from hiding and had the world to themselves.

That's why they always put two blank pages at the back of the atlas. They're for new countries. You're meant to fill them in yourself.

'P…please don't eat me,' Sophie stammered.
The Giant let out a bellow of laughter. 'Just because I is a giant, you think I is a man-gobbling cannybull!' he shouted. 'You is about right! Giants is all cannybully and murderful! And they does gobble up human beans! We is in Giant Country now! Giants is everywhere around! Out there us has the famous Bonecrunching Giant! Bonecrunching Giant crunches up two wopsey whiffling human beans for supper every night! Noise is earbursting! Noise of crunching bones goes crackety-crack for miles around!'
'Owch!' Sophie said.
'Bonecrunching Giant only gobbles human beans from Turkey,' the Giant said. 'Every night Bonecruncher is galloping off to Turkey to gobble Turks.'
Sophie's sense of patriotism was suddenly so bruised by this remark that she became quite angry. 'Why Turks?' she blurted out. 'What's wrong with the English?'
'Bonecrunching Giant say Turks is tasting oh ever so much juicier and more scrumdiddlyumptious! Bonecruncher says Turkish human beans has a glamourly flavour. He says Turks from Turkey is tasting of turkey.'
'I suppose they would,' Sophie said.
'Of course they would!' the Giant shouted. 'Every human bean is diddly and different. Some is scrumdiddlyumptious and some is uckslush. Greeks is all full of uckyslush. No giant is eating Greeks, ever.'
'Why not?' Sophie asked.
'Greeks from Greece is all tasting greasy,' the Giant said.
'I imagine that's possible too,' Sophie said. She was wondering with a bit of a tremble what all this talking about eating people was leading up to. Whatever happened, she simply must play along with this peculiar giant and smile at his jokes.
But were they jokes? Perhaps the great brute was just working up an appetite by talking about food.
'As I am saying,' the Giant went on, 'all human beans is having different flavours. Human beans from Panama is tasting very strong of hats.'
'Why hats?' Shophie said.
'You is not very clever,' the Giant said, moving his great ears in and out. 'I thought all human beans is full of brains, but your head is emptier than a bundongle.'
'Do you like vegetables?' Sophie asked, hoping to steer the conversation towards a slightly less dangerous kind of food.
'You is trying to change the subject,' the Giant said sternly. 'We is having an interesting babblement about the taste of the human bean. The human bean is not a vegetable.'

The butler, an imposing personage named Mr. Tibbs, was in supreme command of all the Palace servants and he did the bet he could in the short time available. A man does not rise to become the Queen's butler unless he is gifted with extraordinary ingenuity, adaptability, versatility, dexterity, cunning, sophistication, sagacity, discretion and a host of other talents that neither you nor I possess. Mr Tibbs had them all. He was in the butler's pantry sipping an early morning glass of light ale when the order reached him.

And for a knife we shall use the great sword hanging on the wall in the morning-room. But clean the sword well first. It was last used to cut off the head of King Charles the First and there may still be a little dried blood on the blade.

Human beans is the only animals that is killing their own kind.

'But human beans is squishing each other all the time,' the BFG said. 'They is shootling guns and going up in aerioplanes to drop their bombs on each other's heads every week. Human beans is always killing other human beans.'
He was right. Of course he was right and Sophie knew it. She was beginning to wonder whether humans were actually any better than giants. 'Even so,' she said, defending her own race, I' think it's rotten that those foul giants should go off every night to eat humans. Humans have never done them any harm.'
'That is what the little piggy-wig is saying every day,' the BFG answered. 'He is saying, „I has never done any harm to the human bean so why should he be eating me?'”
'Oh dear,' Sophie said.
'The human beans is making rules to suit themselves,' the BFG went on. 'But the rules they is making do not suit the little piggy-wiggies. Am I right or left?'
'Right,' Sophie said.
'Giants is also making rules. Their rules is not suiting the human beans. Everybody is making his own rules to suit himself.”

'There is no dream in here,' he said, 'except in the bottles. I has a special place to go for catching dreams. They is not often coming to Giant Country.'
'How do you catch them?'
'The same way you is catching butteryflies,' the BFG answered. 'With a net.'