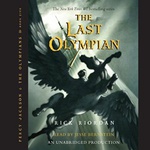 All year the half-bloods have been preparing for battle against the Titans, knowing the odds of victory are grim. Kronos's army is stronger than ever, and with every god and half-blood he recruits, the evil Titan's power only grows. While the Olympians struggle to contain the rampaging monster Typhon, Kronos begins his advance on New York City, where Mount Olympus stands virtually unguarded. Now it's up to Percy Jackson and an army of young demigods to stop the Lord of Time.

In this momentous final book in the New York Times best-selling Percy Jackson and the Olympians series, the long-awaited prophecy surrounding Percy's sixteenth birthday unfolds. And as the battle for Western civilization rages on the streets of Manhattan, Percy faces a terrifying suspicion that he may be fighting against his own fate.

”Understand, Percy. You are refighting the Trojan War here. Patterns repeat themselves in history. They reappear just as monsters do. A great siege. Two armies. The only difference is, this time you are defending. You are Troy. And you know what happened to the Trojans, don't you?"
”So you're going to cram a wooden horse into the elevator at the Empire State Building?" I asked. ”Good luck."

He sighed, not taking his eyes from the game. “Really, Peter Johnson, how long will it take for you to recognize me on sight?”
“About as long as it’ll take for you to figure out my name,” I muttered.

It’s hard to enjoy practical jokes when your whole life feels like one.

The end of the world started when a pegasus landed on the hood of my car.

The campers down at the volleyball pit had early ’90s hairstyles, which were probably good for keeping monsters away.

I made an air bubble at the bottom of the lake. Our friends kept waiting for us to come up, but hey – when you're the son of Poseidon, you don't have to hurry. And it was pretty much the best underwater kiss of all time.

With great power… comes great need to take a nap. Wake me up later.

„Hey, ugly!” Annabeth yelled. I hoped she was talking to the giant, not me.

„Why do you need to gallop while you fly?”
"Why do humans have to sway their arms while they walk? I dunno boss, but it just feels right.”

I am here because when all else fails, when all the other mighty gods have gone off to war, I am all that’s left. Home. Hearth. I am the last Olympian. You must remember me when you face your final decision.