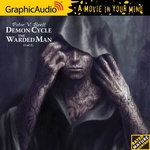 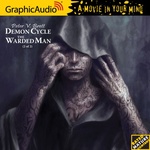 As darkness falls after sunset, the corelings rise – demons who possess supernatural powers and burn with a consuming hatred of humanity. For hundreds of years the demons have terrorized the night, slowly culling the human herd that shelters behind magical wards – symbols of power whose origins are lost in myth and whose protection is terrifyingly fragile. It was not always this way. Once, men and women battled the corelings on equal terms, but those days are gone. Night by night the demons grow stronger, while human numbers dwindle under their relentless assault. Now, with hope for the future fading, three young survivors of vicious demon attacks will dare the impossible, stepping beyond the crumbling safety of the wards to risk everything in a desperate quest to regain the secrets of the past. Together, they will stand against the night.

The Painted Man címmel is megjelent.

Every other marketplace Arlen had ever seen teemed with men, but the Great Bazaar of Krasia was filled almost entirely with women, covered head to toe in thick black cloth. They bustled about, selling and buying, shouting at each other vigorously and handing over their worn golden coins only grudgingly.
Jewelry and bright cloth were sold in abundance in the bazaar, but Arlen had never seen it worn. Men had told him the women wore the adornments under their black, but only their husbands knew for sure.
Krasian men above the age of sixteen were almost all warriors. A small few were dama, the Holy Men who were also Krasia’s secular leaders. No other vocation was considered honorable. Those who took a craft were called khaffit, and considered contemptible, barely above women in Krasian society. The women did all the day-to-day work in the city, from farming and cooking to child care. They dug clay and made pottery, built and repaired homes, trained and slaughtered animals, and haggled in the markets. In short, they did everything but fight.
Yet despite their unending labor, they were utterly subservient to the men. A man’s wives and unmarried daughters were his property, and he could do with them as he pleased, even kill them. A man could take many wives, but if a woman so much as let a man who was not her husband look at her unveiled, she could—and often would—be put to death. Krasian women were considered expendable. Men were not.
Without their women, Arlen knew, the Krasian men would be lost, but the women treated men in general with reverence, and their husbands with near-worship. They came each morning to find the dead from the night’s alagai’sharak, and wailed over the bodies of their men, collecting their precious tears in tiny vials. Water was coin in Krasia, and a warrior’s status in life could be measured by the number of tear bottles filled upon his death.
If a man was killed, it was expected that his brothers or friends would take his wives, so they would always have a man to serve. Once, in the Maze, Arlen had held a dying warrior who offered him his three wives. “They are beautiful, Par’chin,” he had assured, “and fertile. They will give you many sons. Promise you will take them!”

“Did you know that wood demons have two? Stomachs, I mean.

Now come put a baby in my belly

“Is being a mam so important?” Arlen asked.
The woman regarded him as if he had asked if air were important. “What could be more important than motherhood?” she asked. “It’s every woman’s duty to produce children to keep the city strong. That’s why Mothers get the best rations and first pick of the morning market. It’s why all the duke’s councilors are Mothers. Men are good for breaking and building, but politics and papers are best left to women who’ve been to the Mothers’ School. Why, it’s Mothers that vote to choose a new duke when the old one passes!”
“Then why ent Elissa one?” Arlen asked.
“It’s not for lack of trying,” Margrit admitted. “I’ll wager she’s at it right now. Six weeks on the road will make any man a bull, and I brewed fertility tea and left it on her nightstand. Maybe it will help, though any fool knows the best time to make a baby is just before dawn.”
“Then why haven’t they made one?” Arlen asked. He knew making babies had something to do with the games Renna and Beni had wanted to play, but he was still vague on the process.
“Only the Creator knows,” Margrit said. “Elissa might be barren, or it might be Ragen, though that would be a shame. There’s a shortage of good men like him. Miln needs his sons.”
She sighed. “Elissa’s lucky he hasn’t left her, or gotten a child on one of the servant girls. Creator knows, they’re willing.”
“He would leave his wife?” Arlen was aghast.
“Don’t look so surprised, boy,” Margrit said. “Men need heirs, and they’ll get them any way they can. Duke Euchor is on his third wife, and still only daughters to show for it!”

“Creator, Jaik, it’s as if you haven’t practiced at all,” Arlen said, covering his ears.
“Don’t be cruel, Arlen,” Mery scolded. “Your song was lovely, Jaik,” she said.
Jaik frowned. “Then why are you covering your ears, too?” he asked.
“Well,” she said, taking her hands away with a bright smile, “my father says music and dancing lead to sin, so I couldn’t listen, but I’m sure it was very beautiful.”

Leesha looked over at the tent Marick had pitched, barely big enough for one.
“It’s small,” he winked, “but we’ll be able to warm each other in the chill of night.”
“It’s summer,” she reminded him.
“Yet I still feel a cold breeze whenever you speak,” Marick chuckled. “Perhaps we can find a way to melt that. Besides”—he gestured past the circle, where misty forms of corelings had already begun to rise—“it’s not as if you can go far.”
He was stronger than her, and her struggles against him did as little good as her refusals. With the cries of corelings as their backdrop, she suffered his kisses and pawing at her, hands fumbling and rough. And when his manhood failed him, she comforted him with soothing words, offering remedies of herb and root that only worsened his condition.
Sometimes he grew angry, and she was afraid he might strike her. Other times he wept, for what kind of man could not spread his seed? Leesha weathered it all, for the trial was not too high a price for passage to Angiers.
I am saving him from himself, she thought each time she dosed his food, for what man wished to be a rapist? But the truth was, she felt little remorse. She took no pleasure in using her skills to break his weapon, but deep down, there was a cold satisfaction, as if all her female ancestors throughout the untold ages since the first man who forced a woman to the ground were nodding in grim approval that she had unmanned him before he could unmaiden her.
The days passed slowly, with Marick’s mood shifting from sour to spoiled as each night’s failure mounted upon him. The last night, he drank deep from his wineskin, and seemed ready to leap from the circle and let the demons have him. Leesha’s relief was palpable when she saw the forest fortress spread out before them in the wood. She gasped at the sight of the high walls, their lacquered wards hard and strong, large enough to encompass Cutter’s Hollow many times over.
The streets of Angiers were covered with wood to prevent demons from rising inside; the entire city was a boardwalk. Marick took her deep into the city, and set her down outside Jizell’s hospit. He gripped her arm as she turned to go, squeezing hard, hurting her.
“What happened out beyond the walls,” he said, “stays out there.”
ŐÚI won’t tell anyone,” Leesha said.
“See that you don’t,” Marick said. “Because if you do, I’ll kill you.”
“I swear,” Leesha said. “Gatherer’s word.”