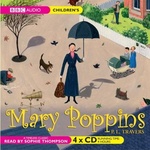 From the moment Mary Poppins arrives at Number Seventeen Cherry-Tree Lane, everyday life at the Banks house is forever changed. This classic series tells the story of the world's most beloved nanny, who brings enchantment and excitement with her everywhere she goes. Featuring the charming original cover art by Mary Shepard, these new editions are sure to delight readers of all ages.
It all starts when Mary Poppins is blown by the east wind onto the doorstep of the Banks house. She becomes a most unusual nanny to Jane, Michael, and the twins. Who else but Mary Poppins can slide up banisters, pull an entire armchair out of an empty carpetbag, and make a dose of medicine taste like delicious lime-juice cordial? A day with Mary Poppins is a day of magic and make-believe come to life!

A spoonful of sugar helps the medicine go down

All three of them were on the way to pay a visit to Mary Poppins's uncle, Mr. Wigg, and Jane and Michael had looked forward to the trip for so long that they were more than half afraid that Mr. Wigg might not be in, after all.

„Why is he called Mr. Wigg – does he wear one?” asked Michael, hurrying along beside Mary Poppins.

„He is called Mr. Wigg because Mr Wigg is his name. And he doesn't wear one. He is bald,” said Mary Poppins. „And if I have any more questions we will just go Back Home.” And she sniffed her usual sniff of displeasure.

A quiet, orderly person who knows that early to bed, early to rise makes a man healthy, wealthy and wise?

“Don’t you know,” she said pityingly, “that everybody’s got a Fairyland of their own?”

CHAPTER TWO The Day Out