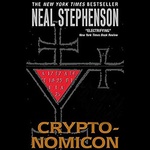 Neal Stephenson hacks into the secret histories of nations and the private obsessions of men, decrypting with dazzling virtuosity the forces that have shaped the past century. Weaving together the cracking of the Axis codes during WWII and the quest to establish a free South East Asian 'data haven' for digital information in the present, Cryptonomicon explores themes of power, information, secrecy and war in the twentieth century in a gripping and page-turning thriller.

One day a couple of weeks later, as the two of them sat by a running stream in the woods above the Delaware Water Gap, Alan made some kind of an outlandish proposal to Lawrence involving penises. It required a great deal of methodical explanation, which Alan delivered with lots of blushing and stuttering. He was ever so polite, and several times emphasized that he was acutely aware that not everyone in the world was interested in this sort of thing.
Lawrence decided that he was probably one of those people.
Alan seemed vastly impressed that Lawrence had paused to think about it at all and apologized for putting him out. They went directly back to a discussion of computing machines, and their friendship continued unchanged. But on their next bicycle ride – an overnight camping trip to the Pine Barrens – they were joined by a new fellow, a German named Rudy von something-or-other.
Alan and Rudy's relationship seemed closer, or at least more multi-layered, than Alan and Lawrence's. Lawrence concluded that Alan's penis scheme must have finally found a taker.

„So what's the point?” Shaftoe asks. He asks this because he is expecting Root to give him an order, which is usually what men of the talkative sort end up doing after jabbering on for a while. But no order seems to be forthcoming, because that's not Root's agenda. Root just felt like talking about words. The SAS blokes refer to this kind of activity as wanking.

The gaffer says something longer and more complicated.
After a while, Waterhouse (now wearing his cryptanalyst hat, searching for meaning midst apparent randomness, his neural circuits exploiting the redundancies in the signal) realizes that the man speaks heavily accented English. He concludes that his interlocutor was saying, „What part of the States are you from, then?”