Lenzi hears voices. She also sees visions--gravestones, floods, a gorgeous guy with steel gray eyes. She knows she must be going crazy, just like her dad did. Her boyfriend, Zak, can't do anything to help, and the voices just keep getting louder, the visions more intense. But when Lenzi meets Alden, the boy from her dreams, everything makes sense.

He tells Lenzi that she's a reincarnated Speaker--someone who can talk to lost souls and help them move on--and that he has been her Protector for centuries. But instead of embracing her abilities, Lenzi struggles between her life as the girlfriend of a sexy musician and the life she is destined to lead with Alden. Yet time is running out; a malevolent spirit has been trying to destroy Lenzi for ages, and he will surely kill her if she doesn't make a decision soon.

Her choices are clear: Destiny or normalcy. Alden or Zak. Life or death.

Sometimes pain is good. It lets you know you’re alive.

“Heaven and Hell really exist, Lenzi. As long as the soul is Earth-bound, it isn’t too late for redemption. There’s hope until the last second.”

I sat down and stared at his empty body. Even lifeless, he was hot.
Thank you.
“Oh, great. You can hear what I’m thinking.” 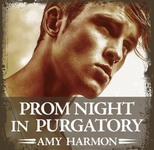