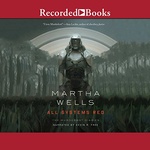 In a corporate-dominated spacefaring future, planetary missions must be approved and supplied by the Company. Exploratory teams are accompanied by Company-supplied security androids, for their own safety.

But in a society where contracts are awarded to the lowest bidder, safety isn’t a primary concern.

On a distant planet, a team of scientists are conducting surface tests, shadowed by their Company-supplied ‘droid — a self-aware SecUnit that has hacked its own governor module, and refers to itself (though never out loud) as “Murderbot.” Scornful of humans, all it really wants is to be left alone long enough to figure out who it is.

But when a neighboring mission goes dark, it's up to the scientists and their Murderbot to get to the truth.

„That’s a human thing to do. Constructs aren’t that stupid.”

I could have become a mass murderer after I hacked my governor module, but then I realized I could access the combined feed of entertainment channels carried on the company satellites. It had been well over 35,000 hours or so since then, with still not much murdering, but probably, I don’t know, a little under 35,000 hours of movies, serials, books, plays, and music consumed. As a heartless killing machine, I was a terrible failure.

Yes, talk to Murderbot about its feelings. The idea was so painful I dropped to 97 percent efficiency.

I tried to decide whether to believe it or not, or whether it mattered, when I was hit by a wave of I don't care.

Gurathin turned to me. „So you don't have a governor module, but we could punish you by looking at you.”
I looked at him. „Probably, right up until I remember I have guns built into my arms.”

In my defense, we'd been here twenty-two planetary days and I hadn't had to do anything but stand around watching humans make scans or take samples of dirt, rocks, water, and leaves. The sense of urgency just wasn't there. Also, you may have noticed, I don't care.

Mensah gave everybody watch shifts, including me. This was new, but not unwelcome, as it meant I had blocks of time where I wasn't supposed to be paying attention and didn't have to fake it.

Then Mensah said quietly, „SecUnit, do you have a name?”
I wasn't sure what she wanted. „No.”
„It calls itself 'Murderbot',” Gurathin said.
I opened my eyes and looked at him; I couldn't stop myself. From their expressions I knew everything I felt was showing on my face, and I hate that. I grated out, „That was private.”
The silence was longer this time.
Then Volescu said, „Gurathin, you wanted to know how it spends its time. That was what you were originally looking for in the logs. Tell them.”
Mensah lifted her brows. „Well?”
Gurathin hesitated. „It's downloaded seven hundred hours of entertainment programming since we landed. Mostly serials. Mostly something called Sanctuary Moon.” He shook his head, dismissing it. „It's probably using it to encode data for the company. It can't be watching it, not in that volume; we'd notice.”
I snorted. He underestimated me.
Ratthi said, „The one where the colony's solicitor killed the terraforming supervisor who was the secondary donor for her implanted baby?”
Again, I couldn't help it. I said, „She didn't kill him, that's a fucking lie.”
Ratthi turned to Mensah. „It's watching it.”