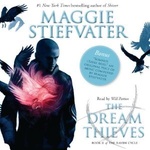 Now that the ley lines around Cabeswater have been woken, nothing for Ronan, Gansey, Blue, and Adam will be the same. Ronan, for one, is falling more and more deeply into his dreams, and his dreams are intruding more and more into waking life. Meanwhile, some very sinister people are looking for some of the same pieces of the Cabeswater puzzle that Gansey is after….

In that moment, Blue was a little in love with all of them. Their magic. Their quest. Their awfulness and strangeness. Her raven boys.

Noah slouched in. In a wounded tone, he said, „He threw me out of the window!”
Ronan's voice sang out from behind his closed door. „You're already dead!”

A secret is a strange thing.
There are three kinds of secrets. One is the sort everyone knows about, the sort you need at least two people for. One to keep it. One to never know. The second is a harder kind of secret: one you keep from yourself. Every day, thousands of confessions are kept from their would-be confessors, none of these people knowing that their never-admitted secrets all boil down to the same three words: I am afraid.
And then there is the third kind of secret, the most hidden kind. A secret no one knows about. Perhaps it was known once, but was taken to the grave. Or maybe it is a useless mystery, arcane and lonely, unfound because no one ever looked for it.
Sometimes, some rare times, a secret stays undiscovered because it is something too big for the mind to hold. It is too strange, too vast, too terrifying to contemplate. All of us have secrets in our lives. We’re keepers or keptfrom, players or played. Secrets and cockroaches — that’s what will be left at the end of it all.

Ronan Lynch, keeper of secrets, fighter of men, devil of a boy, had told them all that he could take objects out of his dreams.

If you never saw the stars, candles were enough.

Holding the phone away from his mouth, Gansey told them, 'Adam thinks he saw an apparition at his place.'
Ronan eyed Noah. 'I’m seeing an apparition right now.'

Once, he had dreamt that he found Glendower. It wasn’t the actual finding, but the day after. He wouldn’t forget the sensation of the dream. It hadn’t been joy, but instead, the absence of pain. He couldn’t forget that lightness. The freedom.

'While I’m gone,' Gansey said, pausing, 'dream me the world. Something new for every night.'

You really didn’t see the sadness or the longing unless you already knew it was there. But that was the trick, wasn’t it? Everyone had their disappointment and their baggage; only, some people carried it in their inside pockets and not on their backs.