The Magical Misadventures of Harold Shea

The Mathematics of Magic was probably the greatest discovery of the ages – at least Professor Harold Shea thought so. With the proper equations, he could instantly transport himself back in time to all the wondrous lands of ancient legend.
But slips in time were a hazard, and Shea's magic did not always work – at least, not quite as he expected…

This omnibus volume of all of the Magical Misadventures of Harold Shea contains The Incomplete Enchanter, The Wall of Serpents and Castle of Iron

“Magic?” asked Echegaray, pointing to the map.
“No. Just a map.”
“What?”
“A map. You know, a picture of the country with the roads and castles and things.”
“Magic,” said Echegaray flatly.
“Okay, it’s magic if you like it that way. Now, if you’ll show us just where we are on the map—”
“We aren’t,” said Echegaray.
“What do you mean, we aren’t? We can’t have walked far enough to get off the map.”
“Never on map. We’re on log.” He patted it to make sure.

The Castle of Iron, chapter 7

„Well, the laws of similarity and contagion hold. They appear to be the fundamantal Newtonian principles, in the field of magic. Obviously the next step is to discover a system of mathematics arising from these fundamentals. I was afraid I should have to invent my own, as Einstein was forced to adapt tensor analysis to handle his relativity equations. But I think I have discovered such a system ready made, in the calculus of classes, which is a branch of symbolic logic.”

The Mathematics of Magic, chapter 5

If he said that one could transport oneself to a different place and time by formula, it could be done. The complete escape from — well, from insignificance, Shea confessed to himself. He would be the Columbus of a new kind of journey!
…
Not the Iliad. The Slavic twilight? No; too full of man-eating witches and werewolves. Ireland! That was it — the Ireland of Cuchulinn and Queen Maev. Blood there, too, but what the hell, you can't have adventure without some danger. At least, the dangers were reasonable open-eye stuff you could handle. And the girls of that world — they were something pretty slick by all description.

Shea took half a dozen quick steps to the roadside. He addressed the man with the phrase he had composed in advance for his first human contact in the world of Irish myth:

„The top of the morning to you, my good man, and would it be far to the nearest hostel?”

He had meant to say more, but paused uncertainly as the man on the horse lifted his head to reveal a proud, unsmiling face in which the left eye socket was unpleasantly vacant.

Shea smiled weakly, then gathered his courage and plunged on: „it's a rare bitter December you do be having in Ireland.”

The stranger looked at him with much of the same clinical detachment he himself would have given to an interesting case of schizophrenia, and spoke in slow, deep tones: „I have no knowledge of hostels, nor of Ireland; but the month is not December. We are in May, and this is the Fimbulwinter.”

A little prickle of horror filled Harold Shea, though the last word was meaningless to him. Faint and far, his ear caught a sound that might be the howling of a dog — or a wolf. As he sought for words there was a flutter of movement. Two big black birds, like oversize crows, slid down the wind past him and came to rest on the the grass, looked at him for a second or two with bright, intelligent eyes, then took the air again.

„Well, where am I?”
„At the wings of the world, by Midgards border.”

He put both hands to his mouth and shouted, „Yo hoooo! Gulltop! Yo hooooo, Gulltop! Your master, Heimdall Odinnsson, calls!”

For a while nothing happened. Then Shea became aware of a shimmering, polychromatic radiance in the air about him. A rainbow was forming and he in the centre of it. But unlike most rainbows, this one was end-on. It extended slowly down to the very snow at their feet; the colours thickened and grew solid till they blotted out the snow and clouds and crags behind them. Down the rainbow came trotting a gigantic white horse with a mane of bright metallic yellow. The animal stepped off the rainbow and nuzzled Heimdall's chest.

Shea, a trifle angry and now completely mystified, turned to ask explanations. Before he could frame the words there was a pounding at the door. Sverre admitted a tall man, pale, blond and beardless, with a proud, stately face and a huge golden horn slung over his back. „There's another of Them,” whispered Thjalfi. „That's Heimdall. I wonder if all twelve of Them are meeting here.”

Shea was not at all sure he wanted to work for Loki as a warlock, whatever that was. There was something sly about the man, uncomfortable. The graceful and forthright Heimdall had impressed him more in spite of the latter's lack of a sense of humour, he mused.

„Hai, turnip man,” said Heimdall suddenly from his corner. „Fill a couple of mugs and bring them hither, will you?”

Shea felt his temper rise at this dictatorial manner. But whatever or whoever Heimdall was, he looked fully capable of enforcing authority. And though the words were peremptory, the tone of voice was evidently meant for kindness. He obeyed.

„Sit down,” said Heimdall. „You have been called Harald. Is that correct?”

„Yes, I was told you are Heimdall.”

„Nothing less than the truth. I am also known as the Watcher, the Son of Nine Mothers, the Child of Fury, and the Golden. I prefer the titles.”

„To tell the truth, I don't come from any of them, but from outside your system of worlds entirely.”

„A strange answer is that, yet not so strange, but it could be true,” said Heimdall, thoughtfully. „For I can see the nine worlds from where I sit and nowhere such a person as yourself. Say nothing of this to the other Æsir, and above all to the Wanderer. He would take it ill to hear there was a world in which he held no power.”

Heimdall, however, was a more complex character, certainly lacking in Loki's sense of humour. And he quite evidently felt he had a position of dignity to maintain with relation to the common herd — as witness his insistence on titles. But equally evidently, he was prepared to accept the responsibilities of that position, throw himself heart and soul and with quite a good mind into the right side of the scales — as Loki was not. Perhaps that was why he hated Loki. And Heimdall, underneath the shell of dignity, had a streak of genuine kindness. One felt one could count on him — and deciding he liked Heimdall the best of the lot, Shea turned over and went to sleep. 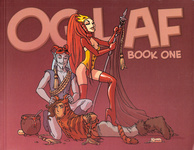 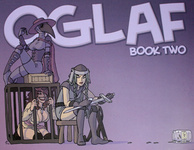