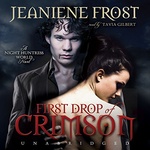 The night is not safe for mortals.

Denise MacGregor knows all too well what lurks in the shadows – her best friend is half-vampire Cat Crawfield – and she has already lost more than the average human could bear. But her family’s dark past is wrapped in secrets and shrouded in darkness – and a demon shapeshifter has marked Denise as prey. Now her survival depends on an immortal who craves a taste of her.

He is Spade, a powerful, mysterious vampire who has walked the earth for centuries and is now duty-bound to protect this endangered, alluring human – even if it means destroying his own kind. Denise may arouse his deepest hungers, but Spade knows he must fight his urge to have her as they face the demon nightmare together…

Because once the first drop of crimson falls, they will both be lost.

“Is that singing?”
Spade let out a snort. “Appears so.”
[…]
“_… I am the very model of a modern Major-General…_” Ian‟s voice, loud and off tune.
Denise blinked. “Is that code?”
Spade shook his head with disgust. “No. It‟s Pirates of Penzance.”
[…]
“_I’m very good at integral and differential calculus,_” Ian continued to sing, interrupted by a crash and then, “Where‟d that bloody statue come from? Er, imitation anyway. I know the scientific names of beings animalculous…”
[…]
“Hallo, all!” Ian announced cheerfully. “That was a capital evening.”
“Ian, mate, you look a bit worse for wear,” Spade gritted out, glaring at him. “Let‟s get you tucked into bed before you break anything else.”
“_I know our mythic history, King Arthur’s and Sir Caradoc’s,_” Ian singsonged.
Cat looked at Bones and let out a grunt. “Useless,” she muttered.
Spade grabbed Ian, hissing something in his ear Denise didn‟t hear. Whatever it was, Ian laughed. “Charles, mate, you fret too much. I‟m a grown man, I am, and I can blood my handle.”
“Handle your blood?” Bones offered dryly.
Ian grinned. “Exactly.”

Why couldn't people acknowledge that occasionally, life just sucked? Didn't they realize that sometimes silence was more comforting than the most sincere expression of sympathy or attempt at showing the deeper meaning behind it all.

Villains of the world, beware! I can eat you under the table AND gross you out with my monster paws!

Humans. Aside from tasting delicious, they were usually more trouble than they were worth.

..she asked him about his costume.

“A cosmic black hole,” Web explained, his mouth lifting in a smile that was polite and challenging at the same time.

Something deadly and unstoppable; of course Web had chosen that to meet his potential new vampire neighbor. She supposed coming as the largest cock of the keep would have been too obvious a statement.

“He’s only being polite. You should look the word up,” Denise settled on.

Ian snorted. “And angels fly out of my arse when I fart.

Spade felt a smile stretch his lips. “Ian!” he exclaimed in an equally cheerful voice. Then he jumped across the boat and punched him hard enough to send Ian catapulting into the ocean.

Ian treaded water, looking not the slightest bit surprised. “All right, you got that out of your system. Can I get back in the boat without you striking me again? Or should I stay out here enjoying the marine life?”

“Why don’t you swim around until you find a shark? Then you can discuss how much the two of you have in common,” Spade shot back.

“You’d better be good to her.”

“Or you’ll shove something silver in me where the sun doesn’t shine?” Spade asked, grinning at Denise.

She looked away in embarrassment at the threat she’d hurled at him just this morning, but Cat nodded.

“And same to you with Crispin, Reaper,” Spade replied in a mild tone.

Denise stifled her snort. As if Spade’s chivalry would allow him to do anything to a woman. The harshest punishment she could imagine him dishing out to Cat would be refusing to open a door for her.

“Ah, could you give me some privacy? I need to use the litter box.”

Villains of the world, beware! I can eat you under the table AND gross you out with my monster paws!