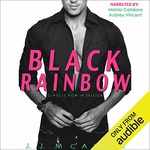 With everyone in class vying to be one of the twelve disciples—a group of twelve students that Professor Black takes under his wing—tensions run high. Thea considers dropping his class, given their passionate week together and their undeniable chemistry. After all, there are other (less infuriatingly sexy) law professors on campus.

But to accomplish her goal and get her father out of prison, Thea knows she needs to learn under the best of the best—and that’s Levi Black.

Just because something is easier, doesn’t mean it’s better.

Who says dreams don't come true? Everyone deserves to have a ‘Happily Ever After’, and she was mine.

God had the most twisted sense of humor.

This was going to be the worst week of my life.

Levi Black, you are such a fucking sadist.

“Don’t worry, everything will be fine, you guys get going,” Bethan said, as she pulled me to her side before I could say another word.

He came over to me and kissed my cheek.

“Aww…” Tristan and Bethan said at the same time, and he glared at them.

Neither of us moved.

“Seriously? This isn’t the Titanic, you’ll see each other again,” Bethan said to us.

“This is the part where you tell me your name.”
“Really? Do you do this often?”
“Do what?” he asked with a frown.
“Sway women with your sultry music, then offer them a drink whilst staring deeply into their souls with your sexy green eyes, in order to get their names.”
“Sultry music? Sexy green eyes? Are you sure you aren’t the one that does this often?” He grinned so wide it was contagious.
Damn him.
“You’re good.”
“I’m sure you’re better.”
Oh damn him to hell.

“There were cellphones in the ‘80s too, you know.”

“That giant rock that people carried around like cavemen does not count as a cellphone,” I informed him.

“My generation suffered so yours could have that nice flip phone,” he shot back. “In the ‘80s, Madonna was amazing, and so were New Kids on the Block. Plus, Will Smith became the fresh prince, and on top of that The Simpsons—”

He rolled his eyes at me. “The ‘80s had The Breakfast Club.”

He paused for a moment, looking shocked— “Did you just compare the original Breakfast Club to its sequel?”

“Well you can’t just throw the Breakfast Club card on the table like that, at least wait until I list a few more ‘90s classics, you jerk.” I sulked, knowing I was beat.

“And I still had my Michael Jackson card to play, because Thriller was the shit.”

If she kissed me now, she would become a student who knowingly seduced her professor, and if I kissed her now, I would become a professor who preyed on my student. Either way, we were both screwed, so fuck it.