As ​Good As Dead (Good Girl's Guide to Murder 3.) 0 csillagozás 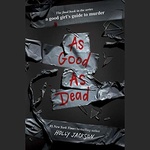 The highly anticipated, edge-of-your-seat conclusion to the addictive A Good Girl's Guide to Murder series that reads like your favorite true crime podcast or show. By the end, you'll never think the same of good girls again.

Pip's good girl days are long behind her. After solving two murder cases and garnering internet fame from her crime podcast, she's seen a lot.

But she's still blindsided when it starts to feel like someone is watching her. It's small things at first. A USB stick with footage recording her and the same anonymous source always asking her: who will look for you when you're the one who disappears? It could be a harmless fan, but her gut is telling her danger is lurking.

When Pip starts to find connections between her possible stalker and a local serial killer, Pip knows that there is only one choice: find the person threatening her town including herself--or be as good as dead. Because maybe someone has been watching her all along…