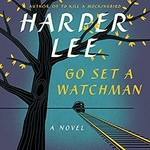 The book is set during the mid-1950s, some 20 years after the events of To Kill a Mockingbird. Scout (Jean Louise Finch) has returned to Maycomb from New York to visit her father Atticus and is forced to grapple with issues both personal and political as she tries to understand both her father's attitude toward society, and her own feelings about the place where she was born and spent her childhood.

It is almost a favourite book. Not entirely, but I liked it more than the Mockingbird, simply because I had no expectations. I knew I liked HL's style, so I tried not to read anything about this story: what it is about, how it came about etc. And I'm glad I did so. Because this way I could enjoy the prose and the story – which started to fold out only at around half of the book, so that is the only reason why I do not put it among my favourites. I preferred if it had gone on like that, flowing like stream, not touching any issue, only the dilemma of moving home and getting married or staying in the city and becoming someone. Of course most will say the conflict should have arisen in the first chapter and referred to through the whole book – but only if one expects a political line behind the family life. Family decisions are intriguing enough, to me.

Prejudice, a dirty word, and faith, a clean one, have something in common: they both begin where reason ends.

We Finches do not marry the children of rednecked white trash, which is exactly what Henry's parents were when they were born and were all their lives. You can't call them anything better. The only reason Henry's like he is now is because your father took him in hand when he was a boy, and because the war came along and paid for his education. Fine boy as he is, the trash won't wash out of him.
„Have you ever noticed how he licks his fingers when he eats cake? Trash. Have you ever seen him cough without covering his mouth? Trash. Did you know he got a girl in trouble at the University? Trash. Have you ever watched him pick at his nose when he didn't think anybody was looking? Trash -”
„That's not the trash in him, that's the man in him, Aunty,” she said mildly.

The house had a routine history for the South: it was bought by Atticus Finch's grandfather from the uncle of a renowned lady poisoner who operated on both sides of the Atlantic but who came from a fine old Alabama family.

She glanced down the long, low-ceilinged livingroom at the double row of women, women she had merely known all her life, and she could not talk to them five minutes without drying up stone dead. I can't think of anything to say to them. They talk incessantly about the things they do, and I don't know how to do the things they do. If we married – if I married anybody from this town – these would be my friends, and I couldn't think of a thing to say to them. I would be Jean Louise the Silent.

It takes a lot of what I don't have to be a member of this wedding.