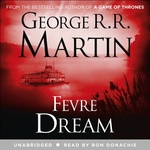 Abner Marsh has had his wish come true – he has built the „Fevre Dream”, the finest steamship to sail the Mississippi. Abner hopes to race the boat some day, but his partner is making it hard for him to realise his dreams. Joshua York put up the money for the ship, but now rumours have started about the company he keeps, his odd eating habits and strange hours. As the „Dream” sails the great river, it leaves in its wake one too many dark tales, forcing Abner to face down the man who made his dreams become reality.

Marsh started in on his oysters, scooping them up on the half shell and swallowing them whole, washing each one down with a healthy gulp of wine.

„Do you know Byron?” York asked Marsh.
Marsh thought a minute. „Know a fellow named Blackjack Pete used to pilot on the Grand Turk. I think his last name was Brian.”
York smiled. „Not Brian, Byron. Lord Byron, the English poet.”
„Oh,” said Marsh. „Him. I'm not much a one for poems. I think I heard of him, though. Gimp, wasn't he? And quite a one for the ladies.”
„The very one, Abner. An astounding man. I had the good fortune to meet him once. Our steamboat put me in mind of a poem he once wrote.” He began to recite.
"She walks in Beauty, like the night
Of cloudless climes and starry skies;
And all that's best of dark and bright
Meet in her aspect and her eyes:
Thus mellowed to that tender light
Which Heaven to gaudy day denies."
„Byron wrote of a woman, of course, but the words seem to fit our boat as well, do they not? Look at her, Abner! What do you think?”

In Austria in 1805, I saw my great chance. On the road by night, I chanced upon a wealthy Viennese merchant fleeing before the French armies. He had all his money with him, converted to gold and silver, a fabulous sum. I stalked him to the inn where he spent the night, and when I was sure he was asleep, broke in to make my fortune. He was not asleep, however. The war had made him afraid. He was waiting for me, and he was armed. He pulled a pistol from beneath his blankets, and shot me.
Shock and pain overwhelmed me. The blow drove me to the floor. It had caught me in the stomach, square, and I bled profusely. But then, suddenly, the flow began to ebb, and the pain lessened. I got up. I must have been a terrible sight, pale-faced and covered with blood. And a strange feeling came over me, one I had never felt before. The moon was coming in through the window, and the merchant was screaming, and before I knew quite what I was doing I was on him. I wanted to silence him, to clamp my hand over his mouth, but… something took hold of me. My hands went to him, my nails-they are very sharp, very hard. I tore open his throat. He choked on his own blood.

I was twenty years old. Among the people of the night, a child still, but now coming into adulthood. When I woke that night in the root cellar, covered with dried blood and clutching the money belt to me, I remembered my father's words. I knew what the red thirst was at last. And only blood will sate it, he had said. I was sated. I felt stronger and healthier than ever in my life.

The food arrived before York could answer. Marsh's chickens were crisped up beautifully, just the way he liked them. He sawed off a leg and started in hungrily. York was served a thick cut of roasted beef, red and rare, swimming in blood and juice. Marsh watched him attack it, deftly, easily. His knife slid through the meat as if it were butter, never pausing to hack or saw, as Marsh so often did. He handled his fork like a gentleman, shifting hands when he set down his knife.

„I have no easy word for what I am,” Joshua said. „In English, your kind might call me vampire, werewolf, witch, warlock, sorcerer, demon, ghoul. Other languages offer other names: nosferatu, odoroten, upir, loup garou. All names given by your people to such poor things as I. I do not like those names. I am none of them. Yet I have nothing to offer in their stead. We have no name for ourselves.”

Sour Billy was a dark, cadaverous man, his long horseface scarred by the pox he'd had as a boy, his hair thin and brown and flaky. He seldom smiled, and he had frightening ice-colored eyes.

„The sun is harsh, burning. Have you ever had a bad burn? If so, you can understand. You've seen how fair I am. The sun and I do not agree.”

In the front of the book, there was a picture of Byron. Marsh studied it. He looked pretty enough, dark and sensual like a Creole; it was easy to see why the women went for him so, even if he was supposed to be a gimp. Of course, he was a nobleman too. It said so right beneath his picture:

Toby was about sixty, bald but for a fringe of iron gray hair around his black skull, his face worn and wrinkled and black as a pair of old comfortable boots.