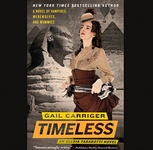 Alexia Tarabotti, Lady Maccon, has settled into domestic bliss. Of course, being Alexia, such bliss involves integrating werewolves into London High society, living in a vampire's second best closet, and coping with a precocious toddler who is prone to turning supernatural willy-nilly. Even Ivy Tunstell's acting troupe's latest play, disastrous to say the least, cannot put a damper on Alexia's enjoyment of her new London lifestyle.

Until, that is, she receives a summons from Alexandria that cannot be ignored. With husband, child, and Tunstells in tow, Alexia boards a steamer to cross the Mediterranean. But Egypt may hold more mysteries than even the indomitable Lady Maccon can handle. What does the vampire Queen of the Alexandria Hive really want from her? Why is the God-Breaker Plague suddenly expanding? And how has Ivy Tunstell suddenly become the most popular actress in all the British Empire?

“You didn’t like him, sir?”
“Oh, Biffy, don’t you think you could call me Randolph by now?”
“Goodness, must I?”
“Everyone else in the pack does.”
“Doesn’t make it palatable. Can I rename you?”
“How very Lord Akeldama of you. Not Dolly, though, please.”
“Randy?”
Sour silence greeted that.
“Lyall, then. Are you going to answer my question, sir, or avoid it?”

Alexia supposed her husband, being Scottish, was accustomed to wearing skirts. And he did have very nice knees. Scotsmen, she had occasion to observe, often did have nice knees. Perhaps that was why they insisted upon kilts.

„Why, Mr. Biffy, you talk such scandal.”
„You wrong me, Madame Lefoux. I never gossip. I observe. And then relay my observations to practically everyone.”

The burden of a spy, Lord Akeldama always said, was not in the knowing of things but in knowing when to tell such things to others.

I do apologize for my husband's behavior."
„Werewolves will happen, my pickled gherkin.”

„I said no such thing, ” grumbled Lord Maccon, allowing himself, begrudgingly, to be trussed in a new evening jacket.

„Much of immortality, you will find, is in surviving the deaths of others.”

Everyone has secrets Biffy, even Lyall.

„Look at those lovely almond-shaped eyes and such thick lashes. But, Alexia, is their skin meant to be so dark?”
Alexia didn't dignify this question with an answer. 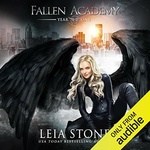