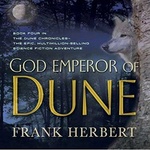 In this fourth novel of Frank Herbert's far-reaching and hugely influential Dune series, it is 3,500 years after the setting of the original DUNE, and Paul Atreides's son, Leto II, has evolved into a deity--half man, half beast (sandworm). Much like the gods of Greek myth, Leto is vengeful, suspicious, and envious of his subjects. He even chooses to wed a mortal. Veterans of the entire series, narrators Simon Vance, Scott Brick, and Katherine Kellgren are so familiar and comfortable with the extensive vocabulary and world of DUNE that they effortlessly bring the many characters, philosophical discussions, and diary entries into an incisive sonic whole. An unexpected and devastating conclusion illustrates just how human some gods can be.

Most civilisation is based on cowardice. It's so easy to civilize by teaching cowardice. You water down the standards which would lead to bravery. You restrain the will. You regulate the appetites. You fence in the horizons. You make a law for every movement. You deny the existence of chaos. You teach even the children to breathe slowly. You tame.

You know it's love when you want to give joy and damn the consequences.

Beware of the truth, gentle sister. Although much sought after, truth can be dangerous to the seeker. Myths and reassuring lies are much easier to find and believe. If you find a truth, even a temporary one, it can demand that you make painful changes.