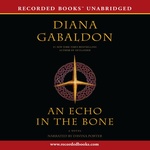 Jamie Fraser, erstwhile Jacobite and reluctant rebel, knows three things about the American rebellion: the Americans will win, unlikely as that seems in 1778; being on the winning side is no guarantee of survival; and he'd rather die than face his illegitimate son – a young lieutenant in the British Army – across the barrel of a gun. Fraser's time-travelling wife, Claire, also knows a couple of things: that the Americans will win, but that the ultimate price of victory is a mystery. What she does believe is that the price won't include Jamie's life or happiness – not if she has anything to say.

Claire's grown daughter Brianna, and her husband, Roger, watch the unfolding of Brianna's parents' history – a past that may be sneaking up behind their own family.

“I wonder—are you in need of anything particular in the medical line?” David Rawlings asked, blushing in turn. “I am quite short of medicinals, but I do have duplicates of some instruments—and quite a good selection of scalpels. I should be most honored if you would…”
“Oh.” That was a gallant offer, and my embarrassment was at once submerged in a tide of acquisitiveness. “Would you perhaps have an extra pair of tweezers? Small forceps, I mean?”
“Oh, yes, of course.” He pulled out the lower drawer, pushing a clutter of small instruments aside in search of the tweezers. As he did so, I caught sight of something unusual and pointed at it.
“What on earth is that?”
“It is called a jugum penis,” Dr. Rawlings explained to me, his color increasing noticeably.
“It looks like a bear trap. What is it—it can’t be a device for performing circumcision, surely?” I picked up the object, which caused Dr. Rawlings to gasp, and I eyed him curiously.
“It—er, please, dear lady…” He almost snatched the thing out of my hands, thrusting it back into his chest.
“What on earth is it for?” I asked, more amused than offended by his reaction. “Given the name, obviously—”
“It prevents nocturnal… er… tumescence.” His face by this time was a dark, unhealthy sort of red, and he wouldn’t meet my eye.
“Yes, I imagine it would do that.” The object in question consisted of two concentric circles of metal, the outer one flexible, with overlapping ends, and a sort of key mechanism that enabled it to be tightened. The inner one was sawtoothed—much like a bear trap, as I’d said. Rather obviously, it was meant to be fastened round a limp penis—which would stay in that condition, if it knew what was good for it.
I coughed. “Um… why, precisely, is that desirable?”
His embarrassment faded slightly into shock.
“Why… it… the… the loss of the male essence is most debilitating. It drains the vitality and exposes a man to all manner of sickness, as well as grossly impairing his mental and spiritual faculties.”
“Just as well no one’s thought of mentioning that to my husband,” I said.
Rawlings gave me a completely scandalized look, but before the discussion could assume even more improper proportions, we were fortunately interrupted by a stir outside, and he took the opportunity to shut his case and tuck it hastily back under his arm before coming to join me at the tent’s entrance.

I’d heard the word “flashback” only briefly, in Boston in the sixties. We didn’t call it flashback earlier, but I’d heard about it. And I’d seen it. Shell shock, they said in the First World War. Battle fatigue, in the Second. It’s what happens when you live through things you shouldn’t have been able to live through and can’t reconcile that knowledge with the fact that you did.

“I want to leave,” she said calmly.
“I dinna blame ye,” he said, with a glance at the house. The arbor was covered with new leaves, the green of them fresh and soft from the rain, but someone would find them soon. “Shall we walk down by the loch for a bit?”
“No, I mean I want to leave here. Lallybroch. For good.”
That took him aback more than a bit.
“Ye dinna mean that, I think,” he said at last, cautious. “It’s been a shock, after all. Ye shouldna—”
She shook her head and put a hand to her breast.
“Something’s broken in me, Jamie,” she said softly. “Whatever it was that bound me … it binds me nay more.”
He didn’t know what to say. He’d avoided the sight of the broch and the burying ground at its foot when he came out of the house, unable to bear the dark wet patch of raw ground there—but now he turned his head deliberately and raised his chin to point at it.
“And ye’d leave Ian?” he asked.
She made a small noise in her throat. Her hand lay against her breast still, and at this she pressed it flat, fierce against her heart.
“Ian’s with me,” she said, and her back straightened in defiance of the fresh-dug grave. “He’ll never leave me, nor I him.” She turned her head and looked at him then; her eyes were red, but dry.
“He’ll never leave ye, either, Jamie,” she said. “Ye ken that, as well as I do.”
Tears welled in his own eyes then, unexpected, and he turned his head away.
“I ken that, aye,” he muttered, and hoped it was true. Just now the place inside him where he was accustomed to find Ian was empty, hollow and echoing as a bodhran. Would he come back? Jamie wondered. Or had Ian only moved a bit, to a different part of his heart, a place he hadn’t yet looked? He hoped—but he wouldn’t go looking just yet awhile and kent it was for fear of finding nothing.
He wanted to change the subject, give her time and space to think. But it was difficult to find anything to say that didn’t have to do with Ian being dead. Or with death in general. All loss is one, and one loss becomes all, a single death the key to the gate that bars memory.

“I’ve brought ye a present, Sassenach.” Jamie plumped the bag down on the table with a pleasantly meaty-sounding thump and a waft of fresh blood. My mouth began to water.
“What is it? Birds?” It wasn’t ducks or geese; those had a distinctive scent about them, a musk of body oils, feathers, and decaying waterweeds. But partridges, say, or grouse … I swallowed heavily at the thought of pigeon pie.
“No, a book.” He pulled a small package wrapped in tattered oilcloth from the bulging sack and proudly set it in my hands.
“A book?” I said blankly.
He nodded encouragingly.
“Aye. Words printed on paper, ye’ll recall the sort of thing? I ken it’s been a long time.”

It was possible to leave things behind—places, people, memories—at least for a time. But places held tight to the things that had happened in them, and to come again to a place you had once lived was to be brought face-to-face with what you had done there and who you had been.

“I imagine we can accommodate each other, then,” I said, returning the smile. “I ought not to ask, I suppose—I don’t intend to hold you up; I’ll give you what you need for your friend—but with thought of possible future trade, have you got more laudanum?”
He continued to smile, but his gaze sharpened—he had rather unusual eyes, that pale gray often described as “spit-colored.”
“Why, yes,” he said slowly. “I have quite a bit. Do you… require it regularly?”
It occurred to me that he was wondering whether I was an addict; it wasn’t at all uncommon, in circles where laudanum was easily obtainable.
“I don’t use it myself, no,” I replied equably. “And I administer it to those in need with considerable caution. But relief of pain is one of the more important things I can offer some of the people who come to me—God knows I can’t offer many of them cure.”
His brows went up at that. “That’s a rather remarkable statement. Most persons in your profession seem to promise cure to nearly everyone.”
“How does that saying go? ‘If wishes were horses, beggars might ride’?” I smiled, but without much humor. “Everyone wants a cure, and certainly there’s no physician who doesn’t want to give them one. But there are a lot of things beyond the power of any physician, and while you might not tell a patient that, it’s as well to know your own limits.”
“You think so?” He tilted his head, regarding me curiously. “Do you not think that the admission of such limits, a priori—and I do not mean only in the medical way, but in any arena of endeavor—that such an admission in itself establishes limits? That is, might that expectation prevent one from accomplishing all that is possible, because one assumes that something is not possible and therefore does not strive with all one’s power to achieve it?”
I blinked at him, rather surprised.
“Well… yes,” I said slowly. “If you put it that way, I rather think I agree with you. After all”—I waved a hand toward the tent flap, indicating the surrounding army—“if I didn’t—we didn’t—believe that one can accomplish things beyond all reasonable expectation, would my husband and I be here?”
He laughed at that.
“Brava, ma’am! Yes, an impartial observer would, I think, call this venture sheer madness. And they might be right,” he added, with a rueful tilt of the head. “But they’ll have to defeat us, nonetheless. We shan’t give up.”

„Someone's been trying to kill the white sow,” he'd announced at breakfast three days ago, looking bemused.
[…]
„Likely 'twas a bear,” she said. „Nothing else would dare. Aidan, mind what Mr. Ian says, here! Dinna be wandering far from the place, and mind your brother outside!”
„Bears sleep in winter, Mam,” Aidan said absently.
[…]
„No, it wasna an animal,” Ian said, finally succeeding in swallowing. „It was a clean slash. Someone went for her wi' a knife or a sword.”
Jamie looked up from the burnt piece of toast he had been examining.
„Did ye find his body?”
Ian grinned briefly, but shook his head.
„Nay, if she killed him, she ate him – and I didna find any leavings.”

To Claire, he thought, death was always the Enemy. Something always to be fought, never yielded to. He was as well acquainted with death as she was but had perforce made his peace with it. Or thought he had. Like forgiveness, it was not a thing once learned and then comfortably put aside but a matter of constant practice—to accept the notion of one’s own mortality, and yet live fully, was a paradox worthy of Socrates. And that worthy Athenian had embraced exactly that paradox, he reflected, with the ghost of a smile.
He’d come face-to-face with death often enough—and remembered those encounters with sufficient vividness—to realize that there were indeed worse things. Much better to die than be left to mourn.