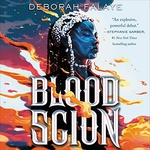 Inspired by Africa's child soldier crisis and set in a West African fantasy world, the novel follows a young Scion—the all but extinct descendants of the ancient Orisha gods—who is drafted into the very military that has hunted her kind for centuries. Stealing the opportunity to uncover what happened the night her mother disappeared, she will do anything to learn the truth —even if it means becoming the killer the army demands.