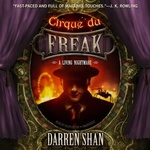 Darren Shan and his best friend, Steve, get tickets to the Cirque Du Freak, a wonderfully gothic freak show featuring weird, frightening half human/half animals who interact terrifyingly with the audience. In the midst of the excitement, true terror raises its head when Steve recognizes that one of the performers-- Mr. Crepsley-- is a vampire!

Stever remains after the show finishes to confront the vampire-- but his motives are surprising! In the shadows of a crumbling theater, a horrified Darren eavesdrops on his friend and the vampire, and is witness to a monstrous, disturbing plea. As if by destiny, Darren is pulled to Mr. Crepsley and what follows is his forrifying descent into the dark and bloody world of vampires.

This is Darren's story.

The lights went down low and a creepy-looking man walked onto the stage. He was tall and thin, with very white skin and only a small crop of orange hair on the top of his head. He had a large scar running down his left cheek. It reached to his lips and made it look like his mouth was stretching up the side of his face.

It's not so bad being scared if you're not alone.

I've always been fascinated by spiders.

Imagine: a real-life vampire! I used to believe they were real but then my parents and teachers convinced me they weren't. So much for the wisdom of grownups!

Early morning would be the best time to steal the spider.

“What are you doing?"
„Looking for my fangs.”
"We don't grow fangs you idiot!

In books, the heroes can make as many mistakes as they like. It doesn't matter what they do, because everything works out in the end. They'll beat the bad guys and put things right and everything ends up cool. Real life's nasty. It's cruel. It doesn't care about heroes and happy endings and the way things should be. In real life, bad things happen. People die. Fights are lost. Evil often wins.

Anything that adults hate is normally awesome.

There are certain things you don't discuss with your friends if you're boys. Girls can talk about stuff like that, but if you're a boy you have to talk about computers, soccer, war, and so on. Parents aren't cool.

Steve knows everything there is to know about horror facts. He's read every sort of horror book there is. He says every story has at least some truth in it, even if most are made up.