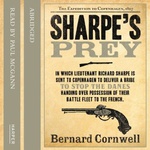 The year is 1807, and Richard Sharpe is back in England, where his career seems to have come to a dead end, despite his heroics in Britain's recent victory at Trafalgar. Loveless, destitute, and relegated to the menial tasks of quartermaster, Sharpe roams the streets of London, pondering a bleak future away from the army.

Then, out of the blue, an old friend invites him to undertake a secret mission—the delivery of a bribe—to the Danish capital, Copenhagen. Denmark is officially neutral, but Napoleon is threatening an invasion in order to capture the powerful Danish fleet, which would replace the ships France lost in its disastrous defeat at Trafalgar. The British, fearing such enhancement of French power, threaten their own preemptive invasion, and Sharpe, whose errand seemed so simple, is trapped in a web of treachery that will end only when the city, which thought itself safe, is subjected to a brutal and merciless bombardment.