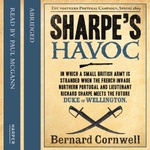 It is the spring of 1809 and a small British army is stranded when the French invade northern Portugal. Sharpe is cut off and tries to fight his way back to the British lines but instead is led into treacherous danger.

When the future Duke of Wellington arrives to take command, he immediately mounts his own counter-attack. Sharpe becomes he hunter instead of the hunted. Amidst the wreckage of a defeated army, in the storm lashed hills of he Portuguese frontier, Sharpe takes a terrible revenge.

Sharpe's Havoc is a classic Sharpe story, with Richard Sharpe in fighting form in the company of Sergeant Patrick Harper, Captain Hogan and Sharpe's beloved Greenjackets.