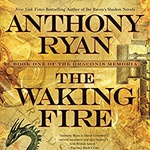 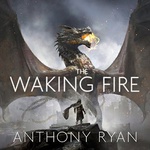 The Waking Fire is set in a vibrant new world where the blood of drakes—creatures similar to dragons—is valued beyond reckoning, and can be distilled into elixirs that grant fearsome powers to those who are “blood-blessed.” The novel follows an unregistered blood-blessed as he searches for an elusive variety of drake so potent, its capture would mean unrivalled riches; the second in command of a blood-burning ironclad ship; and a young woman in a lifelong contract to a trading syndicate, whose espionage mission places her on the front lines of a newly declared war. As empires clash and arcane mysteries reveal themselves, these characters are tested again and again and soon discover that the fate of the world rests on their shoulders.

The Draconis Memoria is a remarkable new epic fantasy series with steampunk flavor, full of the phenomenal worldbuilding and non-stop action that have gained Anthony Ryan a global fan base.

“So what now?” Firpike asked, hunched over and staring at the smoking embers of the camp-fire.
“We keep on the track,” Braddon told him simply.
“I don’t wish to speak out of turn, Captain,” the scholar said, not looking up, though a cautious anger had crept into his tone. “But I can’t help but notice our complete lack of provisions.”
“We could always eat you,” Loriabeth muttered. “Though I’d most likely choke on your bitter flesh.”

“Claydon,” his uncle said, voice softer than usual. “Best not keep them waiting.”
Clay followed him to the upper floor and along a long corridor to a closed door where Braddon paused, hand on the handle. “I ain’t gonna pretend there’s any regard twixt us, boy,” he said, speaking softly and meeting Clay’s gaze with a new intensity. “But you’ve still got Torcreek blood in those veins so listen well. You want to make it out of this room alive, you choose your words carefully. You may think the Blinds is full of the most dangerous folks you’re like to meet, but you never met folks like this before. Whatever they may appear to be, remember that next to them, Keyvine’s a child.”

Clay couldn’t quite suppress his trepidation as he approached the drake. Dead it may be but its tail, secured to the frame’s upper spar by a chain, had an unnerving habit of twitching even hours after the beast’s demise. Also, as Skaggerhill had enthusiastically demonstrated, a drake’s bite reflex lingered for a good while even without a living brain to command it.
“Hah!” The harvester chuckled as the snapping jaws closed on the thick wooden peg he thrust between them. “Only beast on the globe that can kill you when it’s stone-dead.”

“Yes indeedy. Bones, organs, eyes, naptha sacs, brains. It’s all worth something. Only thing best left to the plasmologists is the heart. Stuff you get from the heart is near black and like to burn you to the bone iffen a drop touches your skin. Well, us non-Blessed folks, that is. Reckon you’d be alright. Though I hear tell even the Blood-blessed can’t drink the stuff.”
Clay gave him a sidelong glance. “My uncle told you what I am.”
“No, but it ain’t hard to figure. Why else’d you be here, given your lack of skills and all?”

Clay looked at the vial his uncle had placed on the table. Enough Blue for a trance of some intensity, though, as he had come to understand, the duration did not necessarily relate to the amount of product ingested. He found his palms were sweating and realised for the first time how much his sessions with Miss Lethridge had disturbed him. The ease with which she moved around his mind was disconcerting to say the least, made worse by the evident disdain for what she saw.
“Guess we’ll find out,” he replied.

Mistress Juliza stared at the folder as if she had been handed a ticking bomb. “Madame would never have countenanced this,” she stated, voice hoarse as she met Lizanne’s eyes.
“Madame would have sold every girl here to a whore-house if it furthered her aims,” Lizanne replied, her patience finally worn through.

Action is the antidote to fear.

“‘The concept of stability in markets is perhaps the worst lie ever perpetrated by the corporate elite. In transforming a description into an ideology they blinded themselves to the inescapable flaw of any society built on greed . . .’”

“Cruel? At times. But Tekela was never an easy child, and Leonis dragging them to Morsvale had never been in Salema’s mind when she married the newly ennobled Burgrave with all his medals and, apparently, enjoying the Emperor’s favour. It didn’t make for a harmonious home.”
“Did she know? About the Brotherhood?”
Arberus gave a soft but appalled laugh. “Oh no. Salema was old-money Imperial nobility, but without the money. She used to say the Emperor’s biggest mistake was not depopulating Varestia when he had the chance, and she didn’t say it in jest.”
“She was cover,” Lizanne realised. “What better wife for a man seeking to infiltrate the noble class?”
“You’re judging him according to your own standards. Leonis could be ruthless, for what revolutionary isn’t? But he married Salema because he loved her, despite my strong advice.” His gaze grew more sombre as it returned to Tekela. “Even if he had known of her betrayal, I think he would have forgiven her.”
“Betrayal?”
“Salema’s attitude to marital fidelity mirrored that of her class, in that it was mostly a matter of appearance. It’s how the Corvantine aristocracy while their days away, indulging in affairs and enjoying the associated gossip. I suppose you can’t really blame her for simply following her conditioning.” He caught the calculation in Lizanne’s gaze and shook his head. “She made . . . an approach. When I refused her she looked elsewhere.”
Lizanne looked down at Tekela, recalling the less-than-pleasant meeting at the museum. “Diran,” she said.
“Yes.” Arberus sighed. “Dear old Uncle Diran. Tekela had the misfortune to happen upon them at the wrong moment. Diran came to me in a right old state, worried what it would mean for his friendship with Leonis, not to say access to all his valuable documents and artifacts. I made it very clear to him that this unwise assignation had to end. Salema . . . didn’t take it well.”
Lizanne crouched down at Tekela’s side, drawing the blanket up to better cover her shoulders. The nightmare that woke her that first night, she remembered. I didn’t tell . . .
“I had to pay a sizable bribe to the doctor and the coroner,” Arberus went on. “Leonis was near mad with grief as it was. If he had known it was an opium overdose rather than a lesion of the brain . . .” He shrugged. “What else could I do?”

'My youngest brother said I should kill myself,' he reflected after a lenghty pause. 'The debt I owe you being so great. „One day it will dishonour the entire clan,” he said. „Your death will wash it away.” He even offered to do it himself. His funeral was more expensive than I would have liked, but I was fond of him. He did speak a lot of sense, after all.'