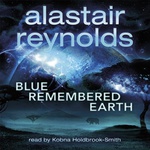 One hundred and fifty years from now, in a world where Africa is the dominant technological and economic power, and where crime, war, disease and poverty have been banished to history, Geoffrey Akinya wants only one thing: to be left in peace, so that he can continue his studies into the elephants of the Amboseli basin. But Geoffrey's family, the vast Akinya business empire, has other plans. After the death of Eunice, Geoffrey's grandmother, erstwhile space explorer and entrepreneur, something awkward has come to light on the Moon, and Geoffrey is tasked – well, blackmailed, really – to go up there and make sure the family's name stays suitably unblemished. But little does Geoffrey realise – or anyone else in the family, for that matter – what he's about to unravel. Eunice's ashes have already been scattered in sight of Kilimanjaro. But the secrets she died with are about to come back out into the open, and they could change everything. Or shatter this near-utopia into shards …

‘Gulliver went to Mars? I don’t remember that part.’
‘That was Robinson Crusoe. At least, I think he was on Mars. Otherwise why would there be a city there named after him?’

‘Thinking machines won’t rise up and crush us. But they will make us over-reliant, unadventurous, unwilling to put our own bodies at risk when machines can stand in for us.’

The entire Indian complex was smaller than one wing of the household, but this was where Eunice had spent months of her existence, holed up with a dozen or so fellow travellers while they waited for the storm to blow over.
‘How did you . . . pass the time?’ Sunday asked. ‘You couldn’t just ching out of it, could you?’
‘We had a different form of chinging,’ Eunice said. ‘An earlier type of virtual-reality technology, much more robust and completely unaffected by time lag. You may have heard of it. We called it “reading”.’

Sunday had decided, provisionally, that she would forgive her brother. She had not arrived at this decision lightly, being very much of the opinion that forgiveness was a non-renewable resource, like petroleum or uranium. The world should not depend on its easy dispensation, nor should hers ever be counted upon.

She had reached Mars – or was at least close enough that it made no difference now. And that in itself was astonishing. It bordered on the miraculous that she had gone to sleep around the Moon and was now . . . here, around that baleful pinprick of golden light she had sometimes seen in the sky. In a flash she understood herself for what she was: an exceedingly smart monkey. She was a smart monkey who had travelled across interplanetary space in a thing made by other smart monkeys. And the fact of this was enough to make her laugh out loud, as if she had suddenly, belatedly, grasped the punchline to a very involved joke.
I’m the punchline, Sunday thought. I’m the period, the full stop at the end of an immensely long and convoluted argument, a rambling chain of happenstance and contingency stretching from the discovery of fire down in the Olduvai Gorge, through the inventions of language and paper and the wheel, through all the unremembered centuries to . . . this. This condition. Being brought out of hibernation aboard a spaceship orbiting another planet. Being alive in the twenty-second century. Being a thing with a central nervous system complex enough to understand the concept of being a thing with a central nervous system. Simply being.
Consider all the inanimate matter in the universe, all the dumb atoms, all the mindless molecules, all the oblivious dust grains and pebbles and rocks and iceballs and worlds and stars, all the unthinking galaxies and superclusters, wheeling through the oblivious time-haunted megaparsecs of the cosmic supervoid. In all that immensity, she had somehow contrived to be a human being, a microscopically tiny, cosmically insignificant bundle of information-processing systems, wired to a mind more structurally complex than the Milky Way itself, maybe even more complex than the rest of the whole damned universe.
She had threaded the needle of creation and stabbed the cosmic bullseye.
That, she thought, was some fucking achievement.
‘Good morning, Sunday Akinya,’ said an automated but soothing voice. ‘I am pleased to inform you that your hibernation phase has proceeded without incident. You have reached Mars administrative airspace and are now under observation in the Maersk Intersolar postrevival facility in Phobos. For your comfort and convenience, voluntary muscular control is currently suspended while final medical checkout is completed. This is a necessary step in the revival process and is no cause for distress. Please also be aware that you may experience altered emotional states while your neurochemistry is stabilising. Some of these states may manifest as religious or spiritual insights, including feelings of exaggerated significance. Again, this is no cause for distress.’

‘How do you feel?’
‘Like I’ve been dead for a month.’
‘You have, Mister Gupta. It’s called space travel.’

The room was a time capsule, a piece of the twenty-first century lodged in the present. The roseprinted wallpaper was paper, not active material: it was pasted onto the walls and couldn’t be altered at a moment’s whim. Rectangular fade marks hinted at the locations of old pictures, join lines where the sheets didn’t quite match, and little white lesions where the paper had been scuffed. The rug on the floor was a kind of textile rather than a self-cleansing frond-carpet. When he stood on it, it didn’t ooze over his shoes and try to pick them clean of nourishment. The furniture was wooden: not the kind of wood that grew purposefully into furniture shapes, but the kind that started off as trees, before being hacked and rolled and sawed and steamed into shape. There were things in this room older than the Cessna.