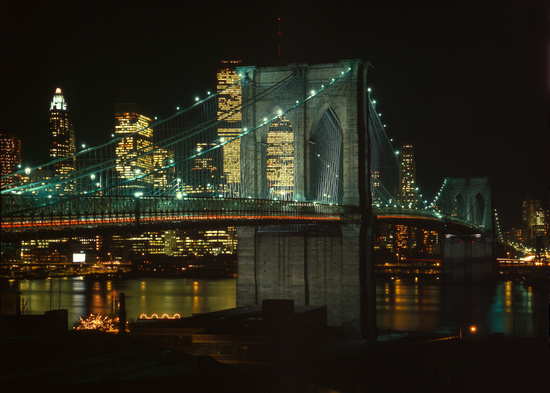 It has been many years since Blue crossed the Brooklyn Bridge on foot. The last time was with his father when he was a boy, and the memory of that day comes back to him now. […] He liked the story he was told that day as he and Blue Senior walked home over the same wooden planks he was walking on now, and for some reason he never forgot it. How John Roebling, the designer of the bridge, got his foot crushed between the dock pilings and a ferry boat just days after finishing the plans and died from gangrene in less than three weeks. He didin't have to die, Blue's father said, but the only treatment he would accept was hydrotherapy, and that proved useless, and Blue was struck that a man who had spent his life building bridges over bodies of water so that people wouldn't get wet should believe that the only true medicine consisted in immersing oneself in water. After John Roebling's death, his son Washington took over as chief engineer, and that was another curious story. Washington Roebling was just thirty-one at the time, with no building experience except for the wooden bridges he designed during the Civil War, but he proved to be even more brilliant than his father. Not long after construction began on the Brooklyn Bridge, however, he was trapped for several hours during a fire in one of the underwater caissons and came out of it with a severe case of the bends, and excruciating disease in which nitrogen bubbles gather in the bloodstream. Nearly killed by the attack, he was thereafter and invalid, unable to leave the top floor room where he and his wife set up house in Brooklyn Heights. There Washington Roebling sat every day for many years, watching the progress of the bridge through a telescope, sending his wife down every morning with his instructions, drawing elaborate colour pictures for the foreign workers who spoke no English so they would understand what to do next, and the remarkable thing was that the whole bridge was literally in his head: every piece of it has been memorized, down to the tiniest bits of steel and stone, and though Washington Roebling never set foot on the bridge, it was totally present inside him, as though by the end of all those years it has somehow grown into his body.