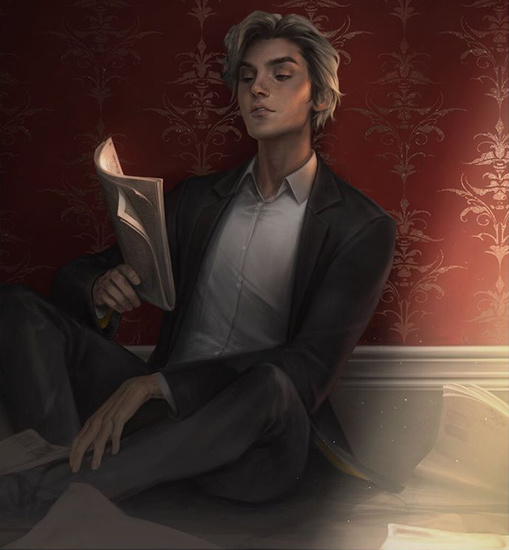 “Your father adores any Carstairs,” said Cordelia. “I’m not sure it’s to my particular credit. He may even like Alastair.”
“I think he has convinced himself Alastair has hidden depths,” said James.
“So does quicksand,” said Cordelia.
James laughed.

“Alastair,“Sona said. “Are you going to this sledding party as well?"
“I wasn't invited."
“That isn't true," Cordelia said. “Alastair, I was only going to go because you were!"
“I have decided that my invitation was sadly lost in the post." Alastair said with a dismissive wave of his hand. “I can entertain myself, Mother. Some of us have things to do and cannot be out cavorting at all hours."

Alastair's gaze flicked to Matthew. “Why," he said, “are you not even wearing a hat?"
“And cover up this hair?" Matthew indicated his golden locks with flourish. “Would you blot out the sun?"
Alastair wore the sort of impression that indicated that no amount of eye rolling would be enough.

„I see you're here, Alastair.” James's voice was curiously flat. „And you look…”
He eyed Alastair's bright yellow-white hair with some astonishment. Cordelia waited for him to continue, with great hop that he would say you look like a turnip, but he didn't.
„You look well,” he finished.

Alastair said goodbye to him at the end of the lane; he said he was leaving Paris the next day, but he continued to refuse to tell Thomas why he was there or where he was going or why he was leaving the next day. Thomas supposed that they weren’t, after all, friends, though he had enjoyed the time they’d spent together. He wasn’t fully sure what a friend was, if it wasn’t someone you enjoyed spending time with.

“They treated you badly?”
Alastair let out another mirthless laugh. “For a while. I realized I had a choice. There were only two kinds of people at the Academy. The bullies and the bullied.”
“And you…?”
Alastair said tightly, “Which would you have chosen?”
“If those were my only two choices,” Cordelia said, “I would have left and come home.”
“Yes, well,” he said. “I chose the one where I wasn’t made to feel like a laughingstock.”
Cordelia was very still and silent. Alastair’s face was impassive.
“And how has that worked out?” she said, as mildly as she dared.
“Awful,” he said. “It’s awful.”

“I could use some help, Alastair. You see how careless my form is.”
Alastair came and took the knife from her. “Very careless,” he agreed. “I know swordplay comes naturally to you, but not everything will. You must slow down. Pay attention to your feet. Now, follow my gestures. That’s it, Layla. Stay with me.”
And she would.

„Charles is going with Gideon Lightwood and Inquisitor Bridgestock to see what's going on ,” Alastair said. „I offered to go with them, but I don't know the streets of London well enough yet. Charles will get me acquainted with the city and I will soon be a gift to any patrol.”
„You a gift,” Matthew said, his eyes glittering. „Imagine.”