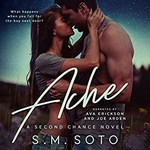 I love you,” he says. And as I stare into his eyes that are filled with so much intensity, I know he’s telling the truth.
Before I have a chance to reply, his mouth swoops down, taking my breath away and making me forget everything but him. Always him.

I hated myself. Not him. That was the cold, hard truth.

Liam Falcon wasn’t the type of man you could ever stop loving, and I didn’t want to. He saves me from the darkest moments in my life. The times I want to give up, he’s always there as vivid as ever in my memories. Even if he has moved on, I can’t deny it.

Sometimes, you just have to stop and wonder if the man upstairs laughs at all your prayers and wishes. Does he look down on you with pity? Because he knows he truly holds all the cards, or does he not feel an ounce of remorse?

Do you ever wonder where rock bottom is?

In ancient times, it was said that the goddess Selene drove the moon across the sky. Each night, she followed Helios, the sun, to catch his fiery rays and reflect the light back to the earth. One night on her journey, she looked down and saw Endymion sleeping the hills. She fell in love with the beautiful shepherd. Night after night, she looked down on his gentle beauty and loved him more until one evening, she left the moon between the sun and the earth and went down to the grassy fields to lie beside him.

For three nights, she stayed with him, and the moon, unable to catch the sun's rays, remained dark. People feared the dark moon. They said it brought death and freed evil forces to roam the black night. Zeus, king of the gods, was angered by the darkness and punished Selene by giving Endymion eternal sleep. Selene returned to the moon and drove it across the night sky, but her love was too strong. She hid Endymion in a cave, and now, for three nights each lunar month, she leaves the moon to visit her sleeping lover and cover him with silver kisses. In his sleep, Endymion dreams he holds the moon.

Turning my head, the fresh smell of grass wafts around me as I stare at the side of his handsome face in complete awe.

– I love you, Endymion Black. Just as the sun loves the moon, and the stars love the night.

The moon has a dark side, just like so many of us, and it sits alone in the sea of stars. For all intents and purposes, I feel like I am the moon.

He’s my planet. All my stars. My whole world. My solar system. My entire universe.