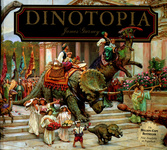 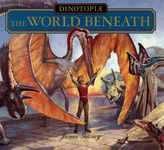 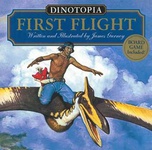 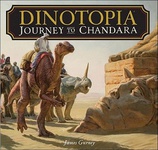 One way to make something look large in a nighttime setting is to have the light shine on just part of the form and fall off rapidly. A very large object, such as a spacecraft, an ocean liner, or a skyscraper, will look even bigger if only parts of it are lit from below by small, weak lights shining upward at it.

„I can't imagine how all these different people and dinosaurs can possibly get along without quarreling.”
„Oh, it is possible,” said Nallab, sucking thoughtfully on a mango „but only if you do imagine it…”

In bright sunlight a newspaper in shadow is darker than a black shirt in the light.

A clear, sunny day has three different systems of illumination: the sun itself, the blue sky, and the reflected light from illuminated objects. The second two sources of light derive entirely from the first, and should be subordinated to it.
On a clear day, the luminous blue dome of the sky surrounds the sun. Compared to sunlight, skylight is a diffuse, soft light coming from many directions at once. At high altitudes, or if the air is especially clear, the sky is even more blue-violet than usual, and the shadows are darker and bluer relative to the sun. As more clouds appear in the sky, shadows become grayer. With more haze or smog, shadows appear relatively closer to the tonal value of the sunlight.

Overcast light is ideal for complicated outdoor scenes. One of its virtues is that it allows you to paint forms in their true colors without dramatic contrasts of light and shade. Without sharp shadows complicating the scene, a picture is simpler and the shapes are bigger.
Surprisingly, colors appear brighter and purer than they do in direct sunlight. It's easier to show the patterns of costumes or signs.

Assuming the sun is not shining directly through the window, the daylight that enters a room from outside is usually bluish. The cool color contrasts with the relatively orange color of artificial lights shining in the room.
On a sunny day there's often a second source caused by light that shines on the ground outside and bounces upward into the window. This light is best seen on a white ceiling. It's often comparatively green or orange in color, depending on the color of the ground surface. If you look closely at a room lit by a north-facing window, you'll notice the floor of the room typically has a bluish cast from skylight and the ceiling has a green or orange cast from light reflected from the grass or the dirt outside.

The brightness of any point-source illumination diminishes rapidly with distance. This weakening of light is called fall-off. It diminishes according to the inverse square law, which states that the effect of a light shining on a surface weakens at a rate comparable to the square of the distance between source and surface. As the diagram above demonstrates, at twice the distance, the light is only one fourth as bright because the same rays must cover four times the area. At three times the distance, it drops to one ninth as bright.

The most common indoor lights are incandescent and fluorescent. To paint their effects, you have to keep in mind three qualities: relative brightness, hardness or softness, and color cast.

BRIGHTNESS
The brightness of bulbs is measured in lumens, but what matters to artists is relative brightness within a scene, especially when you have more than one source. The relative brightness depends on such things as the wattage, the type of lamp, how close the subject is to the light, and how bright the other lights are.

HARDNESS OR SOFTNESS
Hardness or softness refers to how large the patch of light seems to be from the point of view of the subject. A hard light comes from a sharp, small point. The sun-or a spotlight-is a relatively hard source of light. Hard light is more directional and more dramatic. It casts crisper shadows and it brings out more surface texture and highlights.
A soft light emanates from a wider area […]. In general, softer light is more flattering and reassuring. […] Tonal transition from light to shade are more gradual in soft light compared to hard light.

COLOR CAST
The color cast is the dominant wavelength of a light source, often measured in degrees Kelvin, a standard measure based on the main color of light that an object emits when it is heated to extreme temperatures. The color cast is sometimes hard to judge by just looking at a light. The graphs of spectral power distribution show which wavelengths of the visible spectrum have the strongest output.
Regular incandescent lights are strongest in the orange and red wavelengths, and they tend to be weak in blue. That's why red colors in a picture look so good-and blue colors look so dead-under normal incandescent light.
Standard warm white and cool white fluorescents emphasize yellow-green. They're made to give the most light in the range of wavelengths to which the human eye is most sensitive.

Blue-green colors are most common in the ocean because those wavelengths travel the farthest through water.

At that very moment, Will was flying on his skybax, Cirrus, scouting high above the Rainy Basin in search of tyrannosaurs. The clouds were magnificent. His skybax rolled to one side and dove directly into a billowing cumulus. While immersed in the whiteness, Whill thought of his father far below.

James Gurney: The World Beneath