When a faith in humanity-in-general automatically results in casual inhumanity toward individual people, something must have gone awry.

They Shall Have The Stars - Chapter Nine

„The building of gigantic projects for ritual purposes – doing a thing for the sake of doing it – is the last act of an already dead culture. Look at the pyramids in Egypt for an example. Or at an even more enormous and more idiotic example, bigger than anything human beings have accomplished yet – the laying out of the 'Diagram of Power' over the whole face of Mars. If the Martians had put all that energy into survival instead, they'd probably be alive yet.”
„Agreed,” Wagoner said, „with reservations. You're right about Mars, but the pyramids were built during the springtime of the Egyptian culture. And doing a thing for the sake of doing it is not a definition of ritual; it's a definition of science.”

They Shall Have The Stars - Chapter Ten

„Opinions change with age; otherwise what is age for?”

The Triumph Of Time - Chapter Three

„Before we discovered ascomycin, we had to screen one hundred thousand soil samples, including several hundred from Mars and nearly five thousand from the Moon. And do you know where we found the organism that produces ascomycin? On an over-ripe peach one of our detail men picked up from a peddler's stall in Baltimore!”

They Shall Have The Stars - Chapter One

„Natural laws can't be kept secret. Once you give a scientist the idea that a certain goal can be reached, you've given him more than half of the information he needs. Once he gets the idea that the conquest of death is possible, no power on Earth can stop him from finding out how it's done – the 'know-how' we make so many fatuous noises about is the most minor part of research; it's even a matter of total indifference to the essence of the question.”

They Shall Have The Stars - Chapter Seven

Amalfi says the biggest lie it's possible to tell in the English language is, 'It was as simple as that.'

A Life For The Stars - Chapter Nine

The center of government of the King's city was enormously impressive: ancient, stately, marmoreal. It was surrounded on a lower level by a number of lesser structures of equally heavy-handed beauty. One of these was a heavy, archaic cantilever bridge for which Amalfi could postulate no use at all; it spanned an enormously broad avenue which divided the city in two, an avenue which was virtually untraveled; the bridge, too, carried only foot traffic now, and not much of that.
He decided finally that the bridge had been retained only out of respect to history. These seemed to be no other sentiment which fitted it, since the normal mode of transportation in the King's city, as in every other Okie city, was by aircab. Like the City Hall, the bridge was beautiful; possibly that had spoken for its retention, too.
The cab rocked slightly and grounded. „Here we are, gentlemen,” the Tin Cabby said. „Welcome to Buda-Pesht.”

„It's the thing that lures monkeys into cages. And lures cats into open drawers and up telephone poles. It's driven men to conquer death, and put the stars into our hands. I suppose that I'd call it Curiosity.”

They Shall Have The Stars - Chapter Ten

„Up until about the thirteenth century, nobody in the world except a few dedicated scholars could do long division; then Fibonacci introduced the Arabic numbers to the West. Now, any idiot can do what it took a great mind to do in those days. Are you going to complain that because Fibonacci found a better way to do long division, you shouldn't be required to learn why it's better?”

A Life For The Stars - Chapter Five

Space flight had been a natural, if late, outcome of Western thought patterns, which had always been ambitious for the infinite. The Soviets, however, were opposed so bitterly to the very idea that they would not even allow their fiction writers to mention it. Where the West had soared from the rock of Earth like a sequoia, the Soviets spread like lichens over the planet, tightening their grip, satisfied to be at the bases of the pillars of sunlight the West had sought to ascend. 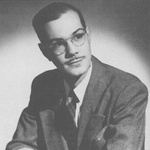