Abstract thoughts in a blue room: Nominative, genitive, elative, accusative one, accusative two, ablative, partitive, illative, instructive, abessive, adessive, inessive, essive, allative, translative, comitative. Sixteen cases of the Finnish noun. Odd, some languages get by with only singular and plural. The American Indian languages even failed to distinguish number. Except Sioux, in which there was a plural only for animate objects. The blue room was round and warm and smooth. No way to say warm in French. There was only hot and tepid. If there’s no word for it, how do you think about it?
(Samuel R.Delany) 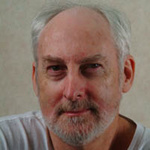